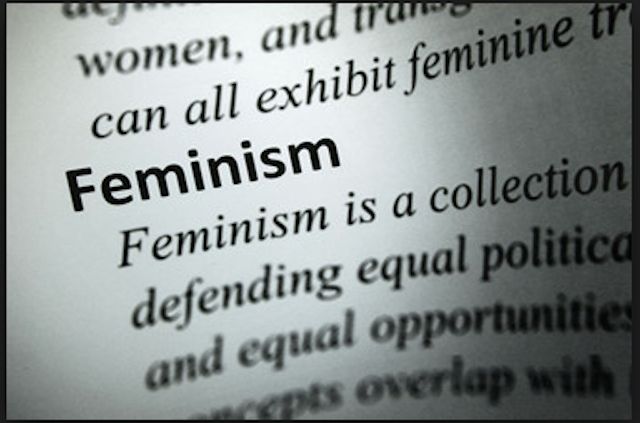 Feminists’ claim 2014 was a great year for feminism but will there be a growing backlash in 2015 who oppose the movement and what it now represents?

According to feminist writers, “2014 was a banner year for feminism.” Women around the world were voicing their outrage against male violence through campaigns and hashtag movements like #YesAllWomen. One writer from the Guardian celebrated the year as one “of feminist insurrection against male violence: a year of mounting refusal to be silent, refusal to let our lives and torments be erased or dismissed.” She outlined last year’s stories of abuse of women from Ray Rice knocking out his girlfriend, the massacre in Isla Vista, California by Elliot Rodger, a mentally deranged man, the latest in the many rape accusations against Bill Cosby, and the list goes on. If speaking out about violence against women is the feminist bull horn than it’s a topic that has more than dominated this past year’s headlines.

However, gender violence and the victimization of women is not all that feminism trumpets. Slate writer, Amanda Marcotte reflects on 2014’s year of feminism in our culture. She writes the so-called “highlights” of feminism in pop culture from Beyonce’s album to even the likes of Disney’s movie Frozen which she claims has a feminist theme. (Hmm, Anna and Elsa were feminists? Who knew?) Marcotte brands feminism as the new cultural trend but how trendy is feminism, really?

The Slate writer tracks the cyclical path feminism has taken and the anti-feminism backlash that inevitabley comes from the political right. “The Reagan years were such a notorious backlash to the second wave of feminism that Susan Faludi wrote a classic book about it,” she stated. “The surge of feminism in the 90’s descended into the religious right craze of the Bush era.” Yes, the Bush years sent the advancement of women back while the Clinton years somehow magically put women forward; even though Clinton stated he “did not have sexual relations with that woman.” If what Marcotte is implying is that modern feminism with its anti-male rhetoric and reproductive “rights” mantra, only advances under liberal ideology and under the legislation of the political left, than I would have to agree.

However, what these writers don’t mention about 2014 was a growing voice of women who were also demanding respect, autonomy, and equality yet were rejecting third wave feminism. It’s easy to call out backlash as political and pinning it to only one side but why won’t feminists have real conversations with other women, of all different political and/or religious platforms, who disagree with modern feminism?

A recent example of this type of disagreement would be the comments by actress Kaley Cuoco-Sweeting in a Redbook interview that made headlines. When asked if she considered herself a feminist she responded,

“Is it bad if I say no? It’s not really something I think about. Things are different now, and I know a lot of the work that paved the way for women happened before I was around… I was never that feminist girl demanding equality, but maybe that’s because I’ve never really faced inequality.  I cook for Ryan (her husband) five nights a week: It makes me feel like a housewife; I love that. I know it sounds old-fashioned, but I like the idea of women taking care of their men. I’m so in control of my work that I like coming home and serving him. My mom was like that, so I think it kind of rubbed off.”

After feminist outrage for her remarks, Cuoco-Sweeting apologized “if anyone was offended.” Why apologize? There are so many women, like Cuoco-Sweeting, who no longer identify with feminism in today’s society and they are not all card carrying members of the Republican Party.

Last July, a group of women took to social media with their own hashtag campaign of #WomenAgaisntFeminism. Many shared their posters outlining why they didn’t identify with the modern-day voices of today’s feminists. Yet, when feminist writers reflect on feminism in 2014 they refuse to even mention the backlash from their own gender. If feminism is about the equal opportunities of the female race then feminists are going to have to have real conversations with other women who disagree on what feminism means in modern society; without resorting to bullying women for their anti-feminism remarks.

With feminists celebrating 2014 as the year for feminism, will more women join the ranks of #WomenAgainstFeminism in 2015? If feminism truly is cyclical, will there be growing backlash against this third wave feminism that does not represent the choices of all women? I highly doubt that feminists will truly engage anti-feminists in any kind of real dialogue in 2015. However, it is my hope that more women will not feel ashamed or bullied to state “no” if asked if they identify with feminism. I hope that more women will find confidence in knowing who they are, celebrating the advances that have been paved for them, and work to advance real change for women around the world who are suffering under systematic violence from Sharia law, honor killings, and forced abortions. Now wouldn’t that be a banner year for ALL women in 2015?

France "Not Afraid"…But Is the Obama Admin?

What Has America Given Us?