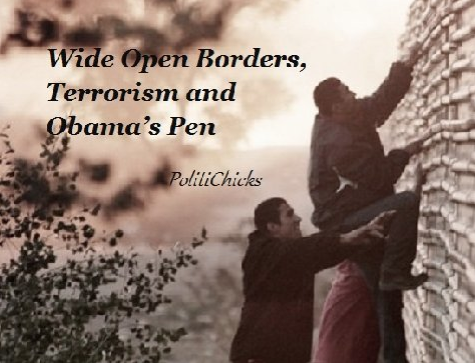 As Obama has made repeated threats to use his pen and veto power, Republicans re nominated John Boehner as Speaker of the House, who has already shown signs of losing his election season spine and folding to Obama’s promised amnesty push.

I don’t suppose republicans such as Boehner, or those who are planning on running for President such as Jeb “Illegals come to America as an act of love” Bush really care about the Southern border as long as Obama’s pen makes sure that those millions of illegals here already are taken care of. They can worry about border security later as they dicker on about so called immigration reform of laws we already have now which they and millions have ignored.

While there are a few Republicans who are focused on this important issue, I have to wonder what people think of the fact that thousands are still pouring through our open border who may not be coming as Jeb believes, out of love, but out of a desire to do acts of terrorism.

CNSNews reported a few days ago about the latest report out by DHS’s Customs and Border Protection from fiscal year 2014 which shows agents apprehended 1,191 individuals from 12 of the 14 countries that DHS and the State Department have considered as having terrorist links.

From Afghanistan four individuals were apprehended while trying to cross our border. Three from Algeria, over one thousand people from Cuba, four from Iran, seven from Iraq, ten from Lebanon, twenty nine from Nigeria, thirty one from Pakistan, sixteen from Saudi Arabia, six from Somalia, fourteen from Syria and six from Yemen.

These are some pretty sobering statistics. For instance, according to the State Department, Cuba (yes the same Cuba Obama has been opening diplomatic relations with and draining the Guantanamo Bay detention facility of Islamic terrorists from) is still listed a State sponsor of Terrorism.

It was reported that two of the Islamic terrorists who perpetrated the terrorist attack in France against Charlie Hebdo were linked to Al Qaida operatives in Yemen. One of the suspects, Cherif Kouachi was reportedly convicted in 2008 of terrorism charges for helping funnel fighters to Iraq’s insurgency and sentenced to only 18 months in prison. The attack which left 12 dead has been called the worst terrorist attack in France in 50 years.

Nigeria has their own share of terrorists from Boko Harim and Al Qaida. Boko Harim made famous by the First Lady Michelle Obama’s #BringBackOurGirls has reportedly killed dozens and burned homes in Baga and torched more than 10 towns and villages in north east Nigeria over the past five days. More than 2,000 people are unaccounted for.

Somalia as well is a terrorist hot spot with al-Shabab who committed atrocities at Westgate Mall in Nairobi, Kenya in September 2013 which left at least 67 dead after 80 hours of brutal slaughter. The US has a large population of Somalis especially in Minnesota where many have been recruited by Islamist groups and some have gone to fight with ISIS.

Pakistan, according to the Terrorism Research site, has “long been a staging ground and planning center for Islamic terrorists operating in South Asia.”

Also according to reports, terrorist groups based in Pakistan operate in plain sight because of the Pakistani state which does nothing and is often involved with terrorism in Afghanistan.

Pakistani groups have been aligned with Al Qaeda, and have been responsible for numerous terrorist attacks in Afghanistan. Back in 2013, the US had warned the Pakistani government that Pakistan’s Punjab was turning into hotbed of extremism.

Iran’s Islamic Revolutionary Guard has operated in Venezuela in the past and Iran is a State sponsor of terrorism according to the State Department. Iran is known to sponsor, fund and give safe haven to terrorists groups Hezbollah and Hamas.

Iran has been in the news a lot during the past few years with our State Department which has been involved in nuclear talks and negotiations. Iran is still pursuing their nuclear capabilities however while many American eyes have been on the progressive cause du jour,   #BlackLivesMatter have ignored much other news which could have impacts in the middle east as well as here in the US.

Speaking of ISIS and in a broader sense, Syria, Iran has been helping Syria’s Assad regime in their war, and is helping Iraq fight ISIS as they view it as an extension of what’s been happening in Syria.

While Iranian American Marine Amir Hekmati and Iranian American Pastor Saeed Abedini have both been in Iranian prisons now for over three years, Obama has reached out through letters and a phone call to Iran’s supreme leader, Ayatollah Ali Khamenei. Not to inquire about our imprisoned American citizens, but about finalizing a nuclear deal which by most accounts is a watered down, redline crossed version of the original before concessions were made by the Obama Administration.

Back in November, it was reported that the Republicans were putting Obama’s deal to Iran over the nuclear issue and offer of help in fighting ISIS on the ballot since both Democrats and Republicans had pushed for votes on tougher sanctions on Iran. Well, Republicans took control of both Houses, and now those Houses are back in business.

With the situations growing in the middle east where more American troops are heading to back Iraq, and in Afghanistan where a large contingent of troops remain after Obama declared the war over, it’s going to be interesting to see what Congress and the Senate will do. It’s no secret that Senators John McCain and Lindsey Graham are big on defense, yet these two led the original Gang of 8 on the immigration reform debates during the past 2 years.

How are they planning on reconciling sending more troops into Iraq and defense spending overseas when they refuse to do anything about securing our southern border now?

Our government has used the immigration debate for political reasons instead of sealing our border for over 20 years when they promised during immigration reform talks under Reagan.

Thankfully 1,191 individuals from States which sponsor terrorism were caught at the border this past year, but the real question remains is how many got through and will they be granted amnesty some day when immigration talks come around again?

Right now there are five separate GOP-sponsored bills which are already pending in the House which would prohibit the Department of Homeland Security from spending any money in 2015 on any part of Obama’s amnesty plan. Alabama Reps. Martha Roby and Robert Aderholt have two competing bills. Pennsylvania Rep Tom Marino, Texas Rep. Ted Poe and Florida Rep. Ted Yoho also have their own bills waiting.

This is likely to be a long, down and dirty fight which is a good start, but they need to focus on the facts that terrorists have been and will keep on coming across the border. We know Obama’s not going to use his pen to secure it, it’s up to our representatives to do their jobs and push for border control and security now.