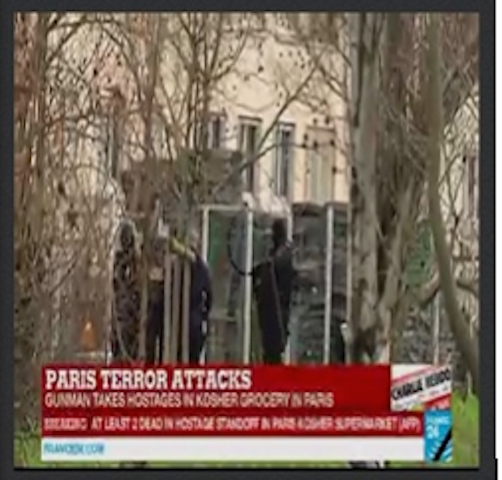 Parisians have endured a third day of terror as more lives have been reportedly taken in the bloody rampage of a small group of terrorist. The first day included the killing of 12 people at Charlie Hebdo and the wounding of 8 more, four of which are still listed as critical. The following day a police woman was killed and a public worker injured by two other terrorist gunmen.

Police had tracked the two terrorist brothers, Said and Cherif Kouachi, who are believed to be behind the Charlie Hebdo murders to a factory outside of Paris. While the police circled the men wanted in this action a new dawn broke the news of a second hostage situation in East Paris. This time the gunman from the shooting which took the life of the French police woman was reported to have taken 5 hostages in a Kosher Grocery.

Reports have indicated that four possible victims in the Kosher hostage situation have been killed. These have not yet been confirmed but French news agencies are reporting that the man intends to not be taken alive and has women and children among his hostages. The tension among those in France is understandably high. Police have both targets surrounded and are trying to bring about a peaceful resolution without further injury.