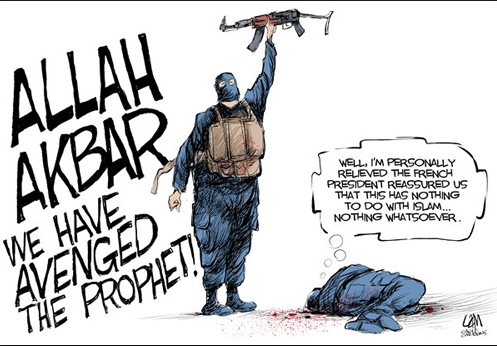 Following the attacks in France by terrorists, French Prime Minister Manuel Valls declared that France is at war with radical Islam.  Heads of state from many nations across Europe and the Middle East came together in unity against the attacks, joined by millions of people carrying signs says Je Suis Charlie – I am Charlie.  The Obama Administration was pathetically absent from this show of solidarity against these attacks.  Attorney General Eric Holder went to Paris but did not participate in the march of unity with the other nations.   Instead he appeared on the many Sunday talk shows.  When asked if we are at war with radical Islam, he could not bring himself to state what has become obvious to the rest of the civilized world.  Utilizing the Obama administration’s tired narrative, he declared we are at war with terrorists who commit heinous acts and who use a corrupted version of Islam to justify their actions.

In the aftermath of the massacres, we are discovering the Kouachi brothers were known to United States, British, Yemeni, and French intelligence. The younger brother served 18 months in prison in France after being convicted on charges of terrorism in 2008.  Both brothers were on the no fly list.  We knew one and possibly both brothers received training in Yemen in 2011 with Al Qaeda in the Arabian Peninsula (AQAP).  There they met Anwar al-Awlaki, the American Muslim preacher killed in a drone strike ordered by President Obama in 2011.   Let’s not forget, Al-Awlaki was also behind the Ft. Hood shootings committed by U. S. Army Major and “Soldier of Allah” Nidal Hasan.  It makes me wonder why there was no international outpouring of concern or unity then.  It appears the French lost interest in their surveillance of the Kouachi brothers in spite of their history of terrorist connections. 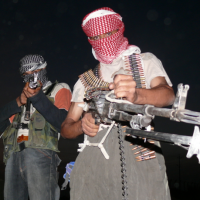 The Obama Administration is attempting to frame this incident as an attack on free speech. This was not an attack on free speech, it was an attack on those who chose to blaspheme the prophet Mohammed, and as President Obama has told us, “the future must not belong to those who slander the prophet of Islam.”  We must not let them redirect our focus from the threat of radical Islamic terrorism.  We must not try to understand why they are committing these acts of terror, or empathize with them, as former Secretary of State Hillary Clinton has said.  We need to understand that sometimes evil just is, and it must be annihilated.

It appears we had the intelligence.  It appears we shared the intelligence.  And yet, we continue to see these attacks being committed at an alarmingly increasing number with better planning and organization.  The Western response should be focused on increased surveillance, more intelligence gathering by capturing and questioning those found to be involved with al Qaeda, ISIS, ISIL or any other variant of these radical Islamic groups, and being proactive instead of reactive in the fight against radical Islam.  We must declare CAIR a terrorist organization and prohibit them from having access to and directing how we train our national security agency personnel in their investigations of terrorist threats.

Here in the South we have these nasty insects called fire ants.  They live in colonies built upon mounds of sand.  If you happen to step in one unaware they will climb up your body by the hundreds without you feeling a thing.  Then some silent signal is given and all of them will bite in unison, causing incredible pain.  My biggest fear is these radical Islamists are planning some nationwide or even worldwide terror event, and like the fire ants, are coordinating to synchronize these events to happen simultaneously.

Daniel Greenfield: The Importance of Blasphemy

From a Shining City on a Hill to Fruit Loops in a Bathtub: What the Heck, America?