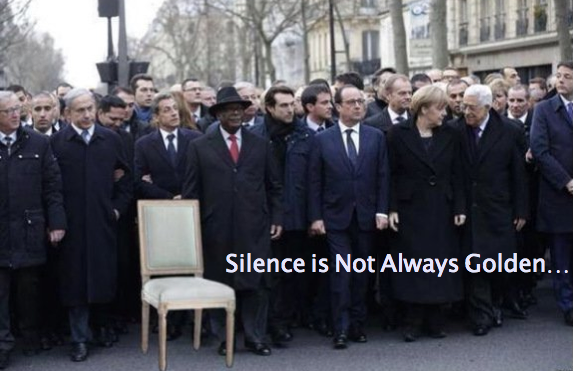 Children were once raised to “be seen and not heard”. Before the days of social media, where the entire world now has the euphoric sensation of being able to say whatever they want, whenever they want, to whomever they want, adults would refrain from saying much of what was on their mind. “Proper” or “civilized” people would fall back on the timeless saying, “Silence is golden.”  This mid-19th century saying we use so often is the second part of a larger phrase. The actual saying is “speech is silver, but silence is golden.” Society leans on the phrase, which holds silence as being a higher standard, more noble and valued, than speaking words, no matter how articulate.

In recent days however, silence from our American leadership has been less than golden and on course with deafening.   The poet Thomas Carlyle first translated this timeless German phrase in 1831, preferring to think of the saying as, “Speech is of Time, Silence is of Eternity.”

Speaking out on horrific acts of terror and violence in the moment of a situation is more valuable than sitting back contemplating. Contemplation, in many instances, leads to the perception of condoning the acts of terror or violence, thus supporting the horrific behavior and in turn reaping an “eternal” effect on the world.

Silence symbolizes support–or lack thereof–no matter how you “spin” your reasoning. American politician Lee Atwater even said “Perception is reality.”  Our government may not support the violent actions of the terrorists who have done so much damage in recent weeks, but the perception their silence wields in the public eye influences most to believe they support the individuals and groups actions. In the case of extremists, this would mean also supporting the exploitation of a religion to bring about destruction of peaceful nations.

Obviously, other world leaders felt silence was not the best response to recent attacks. Forty leaders united in Paris to show they would not be swayed by three or four terrorist’s actions. Their presence supported the estimated 3.7 million people who marched against terrorism. Some leaders, as with Israel’s Prime Minister Benjamin Netanyahu , were even asked by France to not attend the march, but did so nevertheless.

Mr. Netanyahu, as reported by some, had a variety of reasons for the unusual circumstances of his presence not being graciously welcomed, of which security reasons were one given by the Shin Bet security unit. Maybe it was pure grit that made him attend. Whatever the reason, his presence was literally front and center.

Let’s not belabor the point, which all of us have heard, of the White House resigning itself to the fact they should have sent a high ranking official to the march. We won’t continue “quibbling” about it either. As citizens however, we need to realize our leadership gave many of the same reasons for not attending as did Israel’s leader. His country lives in an extreme, mortal fear of destruction from terrorists, much more than America. Yet Israel would not be silent.

Staying silent and using pseudonyms to avoid calling terrorism what it truly is needs to stop.

Think of the impact which can be made by the leader of the free world by taking a public stand against terrorism. It is as though he believes these are mythological occurrences or figments of the world’s imagination, that groups of people can become so radicalized. It doesn’t really matter how Obama identifies himself religiously. No American leader should defend killing others, no matter what the religion teaches or what laws they choose to or not to follow.

It is evident words carry huge power and influence.

Duke University cancelled its plans to allow their tower to be used for amplified calls to prayer for Muslim students. Franklin Graham chose to side with Thomas Carlyle, realizing “speech is of time.” We should have the same realization. No one said Muslims shouldn’t be allowed to pray, yet saying their need for amplified prayer on campus is more important than a Christian being allowed to do the same is unequal in America.  Whether someone champions “religious pluralism” or not, as Christy Lohr Sapp, Duke University’s dean for religious life supports, we do have to realize whatever your religious beliefs, if we choke out one belief others will be next. Somewhere there needs to be a balance of being afforded the opportunity to practice your religion without the need to create havoc in the process.

Sapp noted the Muslim students at Duke, which number approximately 700 of the roughly 15,000 students, are not like the Muslims reported on the “nightly news” and instead appear to be “peaceful and prayerful.” Unfortunately, Islamic radicalism is recruited through the practice of their faith and doesn’t appear until people are attacked.

In the Duke situation, Mr. Graham was fighting two unique fronts: religious freedom and national security. Christian groups are being disenfranchised by universities and colleges nationwide with little outcry from Washington, so a university openly supporting one religion more publicly than another is unwarranted. From a national security concern, because of this particular faith and how some become radicalized in almost covert ways, as citizens there needs to be an awareness and concern of this type of approved behavior. Remaining silent could have dire consequences.

The longer we wait to truly admit the circumstances and dangers our society is facing the greater the opportunity of the pendulum swinging to the farthest sides of danger. The more we sustain the behavior of political correctness and silence, the more difficult it will be to defend our homeland. There is a balance between honoring a citizen’s right to religious freedom and defending the safety and security of our nation. This balance needs to be struck swiftly.

Ex-Muslim's Open Letter to America: "What Else Has To Happen So You Wake Up?!"