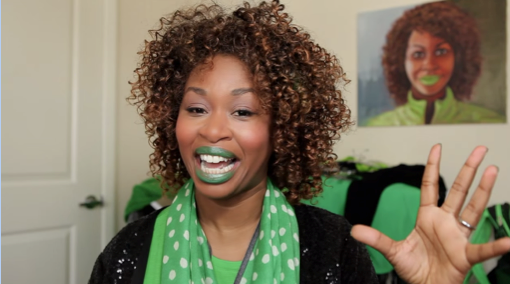 It’s two days after the State of the Union (SOTU) address, and you’d think that President Obama would actually be sitting down with some credible media outlets to answer tough questions such as:

But no. The president has chosen to sit down in an interview with GloZell Green, the self-dubbed YouTube queen to be asked silly questions like:

Of course, Green will also ask the president about the policies outlined in his SOTU speech.

“Green is a California-based entertainer who shot to fame after posting comedy videos on YouTube, which soon went viral. A video of her coughing and sputtering after consuming a ladle full of cinnamon garnered more than 42 million views.

According to her online biography, GloZell has posted more than 2,000 videos online, has over 3 million subscribers to her YouTube channel and about 529 million total page views. She has leveraged her Internet fame to appearances on television shows including the Dr. Oz Show and Showbiz Tonight, and secured a book deal.”

Her video latest is ‘GLoZell’s Cereal Challenge.’ You can watch it here:

Quite frankly, I couldn’t even watch the entire video because it turned my stomach. Don’t get me wrong–I’m sure Ms. Green is a really nice lady. And I like Fruit Loops.  But still. Perhaps, it’s because I’m lactose intolerant.

Either way, is this what the office of the presidency is coming to these days?

Yet, this kind of unconventional forum seems to work for President Obama. After all, he’s all about capturing those Youth voters (which is rather clever, I might add). Remember when he famously appeared on actor and comedian Zach Galifianakis’ web-based parody talk show, “Between Two Ferns” last year? That was also to promote his government health care program, primarily to the Youth.

Perhaps, Republicans should take a page out of Obama’s playbook and also try some unique forums to plug their message to young Americans? What the heck.