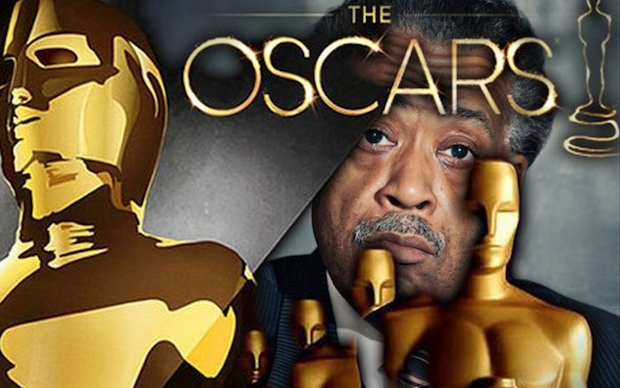 I don’t know about you, but I think the Reverend Al Sharpton has reached the saturation point with the American people. Not only is he a media hound, grabbing the attention of camera crews whenever he can, but he now is considered one of Obama’s main advisors on the subject of race relations at the White House. This, despite the fact that he owes millions of dollars in back taxes to the IRS and has no credibility when it comes to anything. Now, good old Al has injected himself into the Academy Awards!

After he stirred the pot and fanned the flames in Ferguson, MO this past summer, I thought he might lay low for awhile. We didn’t hear a peep out of him when a black man beheaded a woman in Oklahoma, nor did we hear anything from him when two police officers were gunned down by a black man in new York, so I figured he left the spotlight.

Wrong! Not only is he back, but his latest crusade is so ridiculous that it is laughable. Last week when the Academy Award nominees were announced, Rev. Al took to the microphones scorching Hollywood for it’s lack of African American nominees and it’s snub of the Oprah Winfrey film “Selma”. Snub? Excuse me, but unless I’m wrong, Selma is one of the best picture nominees. But Al is not happy, he wants equality among “all” of the nominations and he is heading to Hollywood to have a “diversity discussion” with the powers that be.

Oh, really? As if the liberals in Hollywood don’t bend over backwards to do every thing they can to be inclusive. Did he ever think that maybe the Academy Awards are voted on for “best” achievements, not just political correctness? (Although I must admit, they are skewed toward a certain agenda many times).

He is concerned that the black actors in “Selma” were overlooked in favor of white actors, and that this year’s awards are “all white”. He also said that because of Ferguson, Hollywood should have been more sensitive. Oh please, I can’t take this any more.

If he wants to talk about racism, let’s talk about the casting process in Hollywood. Every day, Breakdown services comes out with a list of projects being cast. Many times before the character breakdowns there is a statement saying to agents and managers, SUBMIT ALL ETHNICITIES EXCEPT CAUCASIAN!, in big bold letters. No one seems to complain about that.

This whole Al Sharpton uproar is just another attempt to divide us. It is also insulting to most African-Americans who want to be nominated and win awards

on their merits and abilities, not just because someone feels they have to give it to them whether they deserve it or not. After all, look at some of the recent Oscars that went to films and performances including “12 Years A Slave”, Jamie Foxx for “Ray” and Halle Berry for “Monster’s Ball”. There have been numerous black nominees in every category, but some years there are less. Some years most of the nominees are from Great Britain or from India (Slumdog Millionaire) or Asia (Ang Lee, “Life of Pi”).

If Hollywood has any guts, it will tell Al to keep quiet. He can do his job and they will do theirs, but I won’t hold my breath for that. Unfortunately Amy Pascal opened the door for Sharpton when she begged for his forgiveness over the Sony hacking racist remarks. So now they have to deal with the consequences.