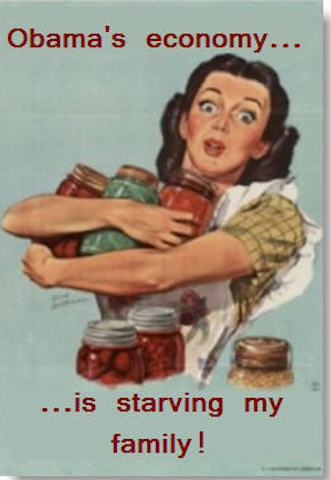 Everywhere I have turned in the last few days; I have heard and reheard President Obama’s assertion that “he” created over 11 million new jobs in the last 5 years. While it might be true that businesses have created 11 million jobs (not Obama), what President Obama fails to mention is that he has been in office 6 years and during his first year in office the economy lost over 4 million jobs. Even with the new jobs created, at best, the economy has created a net amount of 7 million private sector jobs. However, due to the fact that there has also been a loss in government jobs, under President Obama there has been a creation of, at most, 6.4 million jobs during his time in office.

If you still think President Obama’s assertion that he has restored the United States economic health is true, here are just a few of the statistics regarding the economy and labor force that may change your mind:

The way President Obama made it sound in his SOTU address, the United States is in the midst of economic recovery, everyone who needs a job has one, and it is all due to his leadership and policies. The truth of the matter is that we have endured the worst economic recovery on record and much of it is due to President Obama’s policies. Even with the millions of new jobs that have been created and the fact that people’s confidence in the economy is increasing, we still have a long way to go to reach pre-recession economic levels and if President Obama keeps pushing his big government policies, we may never get there.