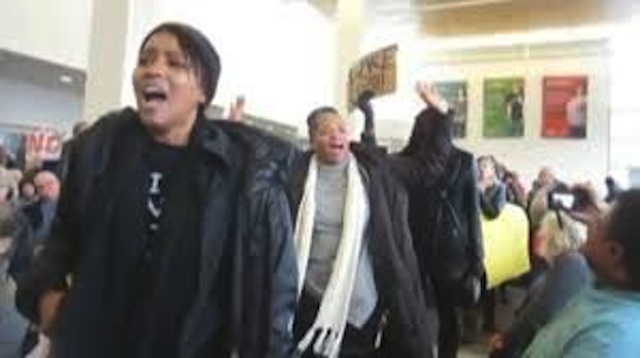 Despite pleas from those in attendance, an event in Portland, Oregon honoring a 100 year old U.S. Navy Vet turned into a fiasco when radical protesters barged in and interrupted the service shouting “I can’t breathe” and “hands up, don’t shoot”.

Veteran Dario Raschio, was attending an awards ceremony in his honor, standing to receive his medals from Democrat Rep. Ron Wyden begged the protesters to stop saying, “Give me a chance. At least let us show a little respect for this occasion.”

Showing no remorse or respect for the pleas to stop, the protesters continued their interruption shouting, “We are just gonna take over the town hall right now.” Raschio was forced to give an abbreviated acceptance speech as the video shows, then hands the microphone over to Rep. Wyden who again pleas to the protest group to show respect.

Raschio received several awards for his service including the U.S. Naval Aviator Badge, the American Campaign Medal, and the Asiatic Pacific Campaign Medal as well as given a flag flown over the U.S. Capitol.

This latest example comes at the same time period that hundreds gathered in an organized fashion to invade restaurants this past Sunday in New York for the #BlackBrunch movement. White patrons were singled out as protesters shouted such phrases as “black lives matter” and the often debunked reporting that every 28 hours a young black male is murdered by police.

"Conditional Tolerance" Is Not Tolerance.