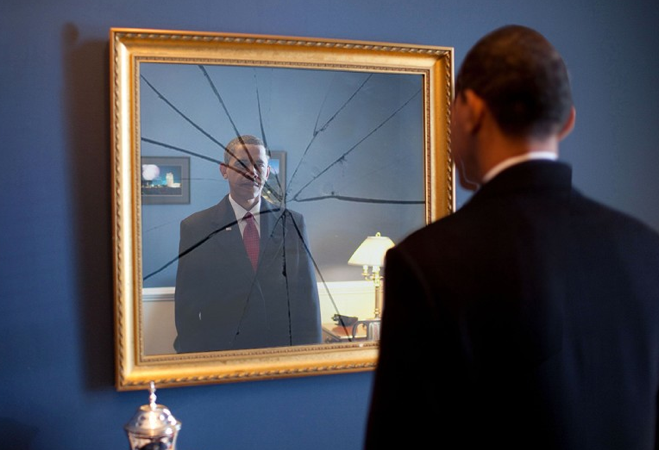 Once again our President feels he is being wrongly perceived. He thinks his image is unfairly tarnished by optical illusions, but as usual our President is dead wrong. His brand is not tarnished by the American people and their inability to see him in the same golden light that reflects in his bathroom mirror but rather some of us see him for what he is: an Anti-American, race baiting, Muslim sympathizer.

In France the likes of forty leaders from around the world stood shoulder to shoulder and linking arms in a line of solidarity against terrorism, but the Leader of the free world was missing. The President of the United States of America was nowhere to be found, in France anyway, as more than one million people marched in Paris and over three million marched in other cities of France. The Vice President of the greatest country on Earth was at home relaxing, and not one single American diplomat was amongst the sea of grieving and angry citizens of France.

Our red, white, and blue were not represented. How can this be true?

The behavior of our President must have thousands of dead military men and women rumbling in their graves. An earthquake of frustrated souls from Arlington National Cemetery would have been in order as once again, we the people were humiliated and embarrassed by our very own President. Until President Bill Clinton/Hound dog and his messy sex life and now this Communist taking up residence on Pennsylvania Avenue… who knew? What is wrong with these Liberal Presidents? I really do not appreciate their behavior and having to explain to the normal youth of America how it was possible for slime balls like this to get elected, twice.   Who does President Obama think he is? President Clinton had some issues for sure, but at least he was American and had sense enough on many occasion to pass decent Republican legislature.

President Obama’s passivity in the face of this blatant deadly rampage of terror on large scale attacks and by alleged “Lone Wolves” that are planted around the world is none other than a bold flag of complicity. The time has come. World War Three is here. It is time to play Cowboys and Muslims and our very own President needs to decide which team he is on. Hard to believe I pose the same question to the sitting American President that President George W. Bush posed to other people around the world after the attack on September 11, 2001:  Are you with us or against us?

On September 12, 2001 for the first time in the history of Capitol Hill, Conservatives and Liberals were one congressional body. The Donkeys and Elephants were holding tails as they sang the poignant words to the Star Spangled Banner and projected their voice as one, ideology. They were one flock of Hawks not Doves.  President Bush was spot on when he addressed the Bombing of the World Trade Center and the death plane that landed in a Pennsylvania field on the way to kill citizens of Washington DC: “Over time it’s going to be important for nations to know they will be held accountable for inactivity” he said. “You’re either with us or against us in the fight against terror.”

That ‘Big Pond’ is not so big after all as WW III is on our very doorstep and we watch carefully for the enemy’s next move.   We need a systemic response that is proactive and unafraid. We need a strong and unafraid President not a wimpy Liberal who is more concerned with protecting Miranda rights and civil liberties and releasing known terrorists from Guantanamo prisoner camp than making damn sure we are as safe as possible.

It is simply mind blowing that our Leader is not reviewing his actions rather than scolding the public and their perception of his complacency.   It is time to put away the golf clubs, stay off of late night television, be a no show at all fundraisers, stay home from vacations and… work. What part of Public Servant does he not understand? He is the Commander in Chief for God’s sake. There is no way to sugar coat this.

On September 12, 2001 there were no blue states, there were no purple states, and there was only the color red as far as the eye could see. Red in the united color of conservatism and a brave leader who would not let the red blood of all those innocent Americans be shed in vain. President Bush let the world know, we would not accept their terror.

President Obama will go down in history as a learning example for our citizens of future generations to come. President Obama gives meaning to one of the vital requirements to be elected POTUS and that is you have to be a native born American. Our Fore Fathers insight continues to bear truth in witness with their vision for our country, throughout time. They understood way before their time how dangerous it could be to have an infidel as Commander in Chief.

It was not a comfortable feeling as a five year old in 1964 hearing the Russian Air Raid siren and looking around at my friends while we sat under our wooden desks, as all good trained public school students were taught to do. But The Cold War was not just a war against Russia it was the war against Communism. When President Regan came into town, he didn’t play ball. He set down the rules of the game; he enforced the ideology and intent of our constitution.

As a grown woman it is darn right scary to have someone like President Barack H. Obama leading the way because these people….Al Queda, ISIS, radical Islamic terrorists are not on the run, in fact they have strengthened in multiples of numbers. There is a specific threat by individuals and groups that are being trained in Yemen and then return freely to the country of their choice, by passport to kill….as many people as possible. This kind of loathing has no boundaries of respect for human life. Their religious ideology grows hate and breeds death and destruction

The Statue of Liberty is covering her eyes, even though she is made of stone. She should give the President a piece of her mind. But a lady doesn’t talk like that.

Conservatives Together We Win, Apart We Are Defeated

The Impossible Task of Counting the Un-Schooled in Home School