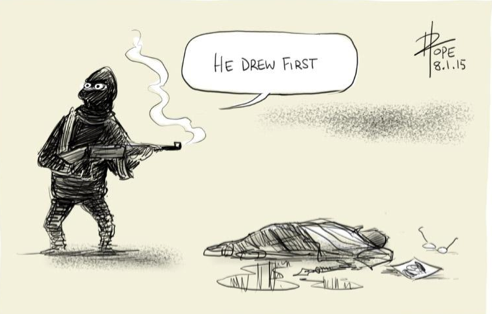 So, were the attackers perhaps slightly justified in their heinous actions since the magazine does have its long history of mocking religions, in particular Islam? Of course not. That’s the thing about free speech. You not only have the right to say (or print) what you want to say (or print), others also have a right to be offended by it.

However, Truth Revolt points out that in November 2011, terrorists firebombed Charlie Hebdo after the magazine announced the Prophet Muhammad as its “editor in chief” for its next issue and also carried a caricature of the Prophet on the cover. Instead of defending the freedom of the press, Time’s Paris bureau chief, Bruce Crumley, criticized Charlie Hebdo for provoking Islamic extremists. He wrote:

“Okay, so can we finally stop with the idiotic, divisive, and destructive efforts by “majority sections” of Western nations to bait Muslim members with petulant, futile demonstrations that “they” aren’t going to tell “us” what can and can’t be done in free societies? Because not only are such Islamophobic antics futile and childish, but they also openly beg for the very violent responses from extremists their authors claim to proudly defy in the name of common good. What common good is served by creating more division and anger, and by tempting belligerent reaction? The difficulty in answering that question is also what’s making it hard to have much sympathy for the French satirical newspaper firebombed this morning, after it published another stupid and totally unnecessary edition mocking Islam.

We, by contrast, have another reaction to the firebombing: Sorry for your loss, Charlie, and there’s no justification of such an illegitimate response to your current edition. But do you still think the price you paid for printing an offensive, shameful, and singularly humor-deficient parody on the logic of “because we can” was so worthwhile? If so, good luck with those charcoal drawings your pages will now be featuring.

Defending freedom of expression in the face of oppression is one thing; insisting on the right to be obnoxious and offensive just because you can is infantile. Baiting extremists isn’t bravely defiant when your manner of doing so is more significant in offending millions of moderate people as well. And within a climate where violent response—however illegitimate—is a real risk, taking a goading stand on a principle virtually no one contests is worse than pointless: it’s pointlessly all about you. So, yeah, the violence inflicted upon Charlie Hebdo was outrageous, unacceptable, condemnable, and illegal. But apart from the “illegal” bit, Charlie Hebdo’s current edition is all of the above, too.”

Sorry, no matter how raunchy and offensive the cartoons may have been, you can’t put Charlie Hebdo on the same moral plane as terrorists who murder in cold blood. That’s insane. Luckily, many people still appreciate freedom of the press, no matter how obnoxious and offensive it may be.

But let’s just take a moment to stop and consider what happens when we’re powerfully intimidated and frightened by terrorists. Some of us actually start to side with them. This is part of the survival instinct, to side with the enemy– so they won’t hurt us.

After all, it requires great courage and moral clarity to stand up to ruthless radicals who have absolutely no respect for human life, much less free speech.