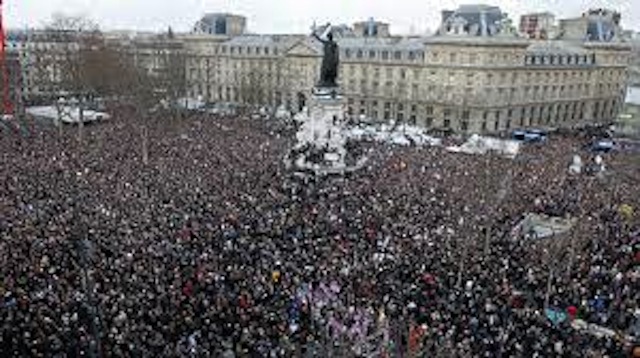 When the opportunity to show solidarity with other world leaders in the wake of tragedy arrived, our President opted out. The leader of the free world, who touts how much he champions freedom of speech and condemned the attacks in Paris that killed a total of 12 citizens, couldn’t bother to even send our Vice President. Over 40 leaders of other countries decided it was worth the time to take a stand against radical Islamic attacks. The list was long and impressive until your realized the United States was missing. The most representation we could come up with was our Ambassador to France, Jane Hartley whose biggest accomplishment was raising a lot of money to reelect Obama.

The apologists for Obama were operating in full force.  The Press Secretary’s office and liberal media outlets either skipped the coverage all together or made a brief statement citing “safety issues” as to why we could only muster up one person to send to represent our country.  Ironically, despite (real) “security concerns” they managed to send 3 representatives to Ferguson, Missouri.

Citing security concerns would be a justifiable excuse if the leaders of the rest of the countries did not show for the same reasons. Certainly President Obama cannot believe that his life would have been in danger more so than that of leaders Benjamin Netanyahu, Angela Markel, or Francois Hollande. It was reported that even Russia sent their Foreign Minister to march in solidarity with the estimated 1.5 million citizens of France.

Americans are embarrassed and angered because we wanted to be represented more as a country than just a token gesture. Many of us took to social media and changed our profiles or sent the hashtag #JeSuisCharlie as our only resource to get the word to France that we wanted to be there and show our support. We have done our part.

So what is the reaction to the criticism by the Obama administration? “Quibbling” is the word given by Secretary of State Kerry. I guess he decided that a single word to express how he feels is consistent with that of his colleague’s “what difference at this point does it make” line. I suppose when you look at the past 6 years of this administration’s response to situations that have a global impact to our national security, it should be no surprise this event was treated in the same nonchalant manner.

As citizens of the greatest country we should continue to express our anger and disappointment to the people of France. We should also remain aware of what may be lurking around the corner. ISIS has already announced we will be attacked; it is just a matter of time when it will happen. They are emboldened and this latest embarrassment will only add to that insanity. I just hope that if we see the same type of attacks on our soil as France did last week, the leaders of the countries that showed up Sunday to march in Paris will show up on our streets and march with us.  Unfortunately our own administration doesn’t seem concerned at all and once can imagine Prime Minister Netanyahu looking at President Holllande and saying, “I told you Obama would show you the same concern as he has shown my country.” Pity.

Preaching Allah In Our American Schools