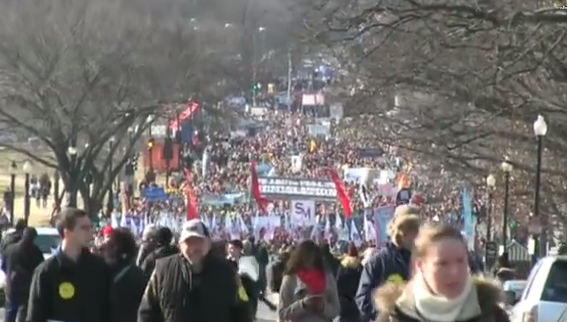 On the evening before the 2015 March for Life in Washington D.C., House Republican leaders dropped plans to vote on an anti-abortion bill. The “Pain Capable Unborn Child Protection Act” would have put a ban on abortions after the 20th week of pregnancy or saved a five month old baby in the womb.

I was in Washington D.C. ready to march in my very first March for Life, when I read the Republicans decision to drop the bill. What was most surprising was the statement made by Rep. Rene Ellmers (R-NC) who withdrew her support over the bill due to concerns of political fallout.

The week before in Hershey, PA, Ellmers spoke out against the bill in a closed-door open-mic session of House Republicans. “I have urged leadership to reconsider bringing it up next week.… We got into trouble last year, and I think we need to be careful again; we need to be smart about how we’re moving forward,” Ellmers said in an interview. “The first vote we take, or the second vote, or the fifth vote, shouldn’t be on an issue where we know that millennials—social issues just aren’t as important [to them].”

If social issues are not important to millennials then why were the majority of marchers in the March for Life between the ages of 15- 29 years old? Even local media outlets recognized the amount of young people among the over 300,000 marchers. The Washington Times interviewed many students who made their way from all over the country to be a part of the largest pro-life gathering. “I have always been taught that we should respect the dignity of everyone, including the unborn, said Sara Silander, a 21-year-old senior from Jacksonville, Florida. “We’ve always been told to protect the minorities, the impoverished and everyone, and that is so important, but we have to also include the unborn.”

If Rep. Ellmers would have walked with the marchers or even taken a moment to see the overwhelming amount of young people at the March, she would recognize that millennials do care about social issues, especially abortion.

I was there walking among the marchers and I have yet to see any photographs or videos able to truly capture the essence of how large the crowds were of young people marching for life. Many of them chanting, “We Are the Pro-Life Generation!”

Our nation has endured the tragedy of 56 million lives lost since Roe v. Wade in 1973. One out of every five unborn babies die from an abortion- many after the 20th week of pregnancy. Despite the tragedy of the staggering amount of lives lost, there is hope of a new generation who will fight to end abortion. Courage lives in our young generation of millennials despite the cowardliness of our Republican leaders who refuse to sign a bill based on their own political ramifications.

One person tweeted after the bill was dropped, “If a ban on killing 20 week old babies in the womb is controversial in Republican Party, it’s time to end the charade that it’s the values party.”

Republican leaders can ignore the amount of people marching who represent just a fraction of the population in this country who are opposed to abortion. However, they will not be able to ignore them when they vote their values at the polls.

Watch the following video of the 2015 March for Life:

The Most Important Superbowl Commercial of All Time.

Republican Gives Power to Dem on Colorado State Board of Education