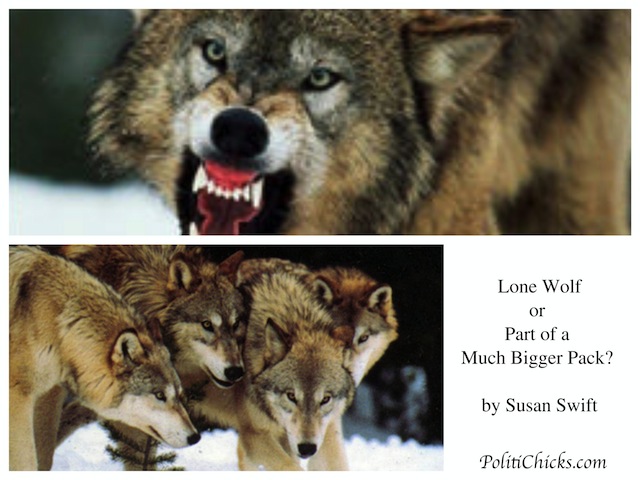 After a high profile shooting or bombing – D.C. Sniper, Times Square Bomber, Boston Marathon Bomber, Ft. Hood, Congresswoman Giffords’ shooter, etc – the Mainstream Media promptly launches an entirely fact-free broad brush smear campaign against their “usual suspect” – the Tea Party White Male Veteran Bitter-Clinger gun-wielding knuckle dragging Conservative (you know, those types who founded this country, fought and died to protect it and still volunteer to protect it today). But when the facts crystallize and the criminal instead turns out to be perhaps Muslim, or registered Democrat, the Media just as promptly spins and re-labels the perpetrator a “Lone Wolf” whose actions reflect no group characteristic and has no meaning beyond the discrete crime, therefore, case closed.

“Lone Wolf” suggests aberration, madness, a random quality to the target and disconnection from the deadly consequences and from reality. It is Liberal Code for a crime hardly worth publicizing or analyzing. It is like calling someone insane, a kook, or “nut job”, dismissing any larger danger or further investigation of motive. “Lone Wolf” is cynical media branding designed to mute those who might ponder motives, find parallels, deduce from evidence or draw logical connections.

Militant Islam is the current favorite application of the Lone Wolf narrative by the Mainstream Media and Left. The Ft. Hood massacre, Shoe Bomber, Underwear Bomber, Times Square Bomber, and Boston Marathon Bombers all had unmistakable Jihad motivations just like the Charlie Hebdo killers. Within hours of the Charlie Hebdo attack, Good Morning America talking heads floated the words “Lone Wolf” while the story broke, signaling the go-to knee-jerk narrative pre-launch before the facts came in. They quietly dropped the narrative as contrary facts emerged.

Because, you see, the narrative fails when the Lone Wolf is actually part of a pack. Increasingly, we are seeing evidence of such an Islamic Wolf Pack.

Al Qaida, itself an instigator of Jihadi attacks against the West, now brags how it motivates and enables such “Lone Wolf” attacks like the killings at Charlie Hebdo. These guerilla-style assaults are not random nor disconnected but rather encouraged by Islamic leaders, funded by Islamic groups and entities (such as al Qaeda and Saudi Arabia), and coordinated and promoted via social media with the common long-term goal of defeating the West and establishing an Islamic State in the Levant.

Why? Why hide connections based on religion and culture? Why dismiss, brand and impugn those who suggest them? Are these politicians, journalists and television producers really that ignorant and obtuse? Or could it be an alliance? Are the American Media and the political Left in fact tacit allies to Islamic radicalism? Do they share a common goal with Jihad, namely, the downfall of Western civilization?

By stubbornly refusing to confront the reality of militant Islam, does the Leftist Media (wittingly or unwittingly) aid radical Islam’s designs to undermine American Culture, American Exceptionalism, American Capitalism? Liberal ideology and Jihadism both abhor the notion of the strong, self-reliant, independent individual in whose eyes Government is a servant, not the master. Does the leftwing Mainstream Media adopt a “the enemy of my enemy is my friend” approach to militant Islam?

The very notion of tolerance emanates from Christ Himself. “Turn the other cheek.” “Do under others as you would have them do unto you.” These Christian concepts displaced Hamurrabi’s Code of an eye for an eye. Our Constitution was founded on Judeo-Christian principles that God grants all men life, liberty and free will. It is from men that governments receive their power, not the other way around. Thus, the First Amendment shields from oppression the same Media and Leftists currently attacking Hobby Lobby and other Christian groups for practicing their religion.

It is Jesus’ teaching of tolerance and love of neighbor that grants the press its license to speak, to criticize and to mock without fear of attack by state-run agencies. Yet these Leftists and Media who unhesitatingly slander Christianity and savage Christians based on isolated events or individuals will cry “Islamophobia!” at any disparagement of Militant Islam. Meanwhile victorious shouts of “Allahu Akbar” echo across the United States as the press falls in line while Sharia law creeps into American jurisprudence to gradually undermine the separation of church and state.

There’s a cartoon in there somewhere for someone brave enough to draw it.

Does Reverend Al Want Affirmative Action At the Academy Awards?