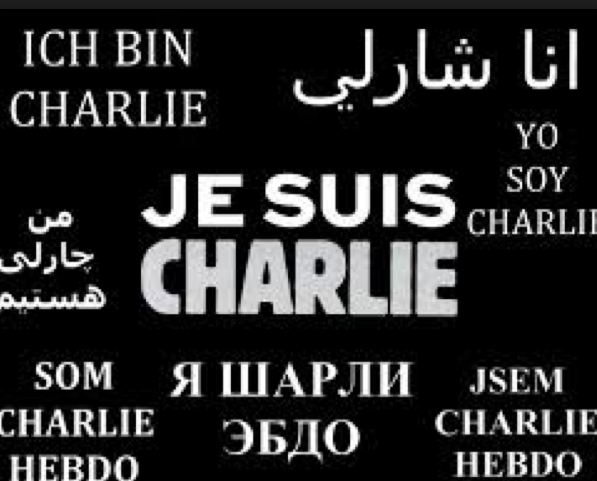 On January 7, twelve people in Paris were murdered, and freedom of expression once again fell under attack. People worldwide responded to this act of barbarism with hashtags.

I’m not usually a fan of hashtags. They can’t cure disease, free the captive, or feed the hungry. Hashtags are a quick way to make us feel good about ourselves without actually doing anything. But this case is different. When freedom of expression is under attack, how better to launch a counter offensive than to fight back with words and pictures?

Charlie Hebdo is a French satirical weekly publication. The content is left-wing and anti-religious. The satirists are equal-opportunity offenders with a long history of mocking many religions, including Christianity, Judaism, and Islam. Today, three Islamic extremists carried out a well-planned attack against the publication’s staff in retaliation for offense to their prophet. Twelve people were killed, including two police officers, editor Stéphane Charbonnier, and cartoonist Jean Cabut, known as Cabu. People all over the world reacted, using the hashtag #JeSuisCharlie (I am Charlie) in social media posts. Many attended rallies, carrying signs reading “Je suis Charlie” and “Not Afraid.” Cartoonists and journalists worldwide have expressed their sorrow and their commitment to protecting freedom of expression in word and picture.

As a conservative who reveres the right to worship, I doubt the staffers at Charlie Hebdo and I would have been fast friends. We didn’t have a lot in common, and some of the cartoons I’ve seen do offend me.  But that’s okay. Freedom from Offense is not a right. In fact, it is impossible. Offense is in the eye of the beholder. Anything is potentially offensive, and if you tried to avoid it completely, you’d have to become Marcel Marceau. Wait. I’m pretty sure some of his performances offended someone.

Political correctness is death to freedom of expression, but try explaining that to British Muslim political activist Anjem Choudary, who tweeted, “Freedom of expression does not extend to insulting the Prophets of Allah, whatever your views on the events in Paris today!”

Well, actually, Anjem, it does. Freedom to express the uncontroversial and inoffensive is no freedom at all. I understand that depicting their prophet is profane to the followers of Islam. The exhibition of a photograph of a crucifix in a bottle of urine was profane to Christians, but photographer Andres Serrano is not in prison or in the morgue. Those of us who don’t approve of his art don’t partake of it. It’s that simple.

With few exceptions, people should be free to express ideas and opinions in the public forum. There may be social consequences, but there should not be legal ones, and you should not fear for your life. If we want to live in peace, we need to stop trying to prevent offense. Instead, we need to develop the ability to weather things that insult or offend. British actor/comedian Rowan Atkinson spoke of this at a Reform Section 5 Parliamentary reception. Although the topic was different, his advice is sound:

“For me, the best way to increase society’s resistance to offensive or insulting speech is to allow a lot more of it. As with childhood diseases, you can better resist those germs to which you have been exposed. We need to build our immunity to taking offense so that we can deal with the issues that perfectly justified criticism can raise.”

While many American media outlets blur photos or refuse to print anything that could be offensive to Muslims, European news outlets are reprinting the art for all to see. If you refuse to print it, the terrorists win. Literally.

Keep retweeting. Keep sharing. Keep writing commentary and creating art. Show those who would take away your freedom that you are not afraid. If they silence us, they win.

Risky? Doubtful. You’d have to work hard to rise to the level of Charlie Hebdo. But even if it is, freedom is worth the risk. As Stéphane Charbonnier once wrote, “I prefer to die standing than to live on my knees.”

Maybe we had something in common after all.