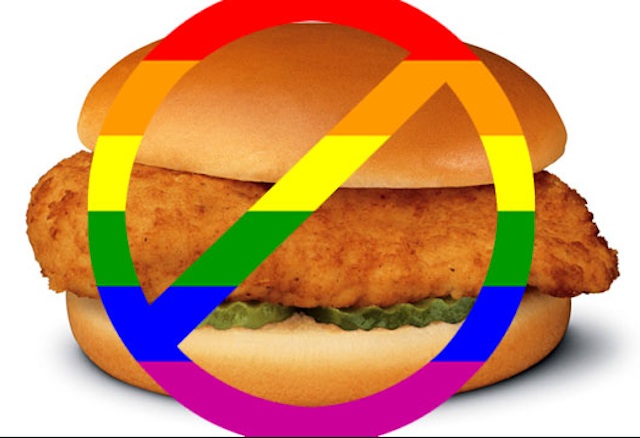 Chick-fil-A’s slogan is “Eat Mor Chickin” but students at Indiana University (Bloomington campus) voted “no” to more chicken based on concerns over the company’s views on same-sex marriage and other LGBT issues.

The Chick-fil-A franchise at the Wells Library location was previously under contract with Sodexo, a food management company, but the campus recently decided to exercise a clause in the contract allowing the site to be managed by Residential Programs and Services. With RPS in talks with Chick-fil-A in continuing service at the location, RPS Executive Director, Patrick Conner, reached out to students of the Residence Hall Association for their input.

The student representatives of RHA voted 18-9 to cut ties with Chick-fil-A, partially based on the question of whether the company’s views on LGBT issues would be “congruent” with supporting the LGBT community on campus at IU. The Residence Hall Association also voted unanimously in that same meeting to support the Spectrum thematic community. This proposal is to establish a residence hall floor for gender blind housing for those who identify as lesbian, gay, bisexual, transgender, and those in support of such a community.

Student representative Andrew Ireland, who voted to keep Chick-fil-A, said he understood why some students would be in support of this decision and they are welcome to their opinion but “to simply silence one side to prop up another is not building an inclusive community; it’s building a community as you would like to see it.”

The focus of RHA is about the LGBT community and despite the fact that Chick-fil-A has never made a public statement or has ever discriminated against the LGBT community, student representatives voted no based on social and political implications. Maintaining ties with Chick-fil-A would be incongruent with the work they have done to build an “inclusive” community.

Young Americans for Freedom at Indiana University- an organization dedicated to promoting conservative principles on campus- weighed in on this issue. The organization’s chairman Matt Shute remarked, “A University is supposed to support a free medium of ideas, a free discourse and the university itself shouldn’t take sides, especially in something that is as divisive as the gay marriage debate. Shute further stated, “This is not about gay marriage. It is about what we believe about the free market. People vote with their wallet and consumers should decide who they give their business to. Why on a campus of thousands of students and faculty, should a body of a couple of dozen individuals decide whether or not people have a choice to shop at Chick-fil-A?”

Is RHA trying to protect the student body (the consumers) from a “hateful” company or are they trying to punish Chick-fil-A for their views?

The University has four Starbuck franchises on campus but there has never been a debate or a vote against removing Starbucks by a conservative group despite their public advocacy of gay marriage. Shute remarked, “I can’t imagine that would be taken kindly to. It’s a real double standard. Universities should foster and encourage debate—not stifle it.” In fact, students who voted to keep Chick-fil-A also unanimously voted for gender blind housing. There was no intolerance or “hate” regarding LGBT issues on the side of those in favor of the franchise.

So what does Indiana University’s decision by a small governing body have to do with our society as a whole?

The ramifications of limiting freedom start at the local level even at the local governing body of an educational institution. Students are objecting to this strong arm against a franchise because that is not what our constitutional freedoms and our free market system is all about. Allowing a governing body to take away a business without debate or public discourse is totalitarianism. Haven’t we had enough of government deciding what is and isn’t best for the consumer. And is this really the example we want in our American universities that are supposed to represent free expression and debate in an all-inclusive society?

I don’t know about you but my vote is to “Eat Mor Chickin.”

Clare Lopez: Behind the Scenes of the Suleymani Hit

Clare Lopez: Behind the Scenes of the Suleymani Hit

Barry Shaw: Democrats Hold a Wake Without a Body