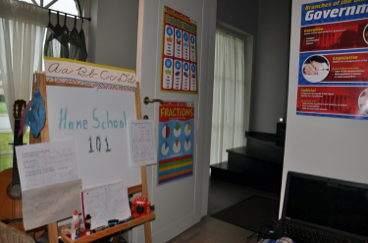 Homeschooling is legal in all 50 U.S. states but requirements are not equal in all 50 states. According to the Home School Legal Defense Association (HSLDA) 11 states require no reporting of students being homeschooled and 15 states require only the parent to notify the state they intend to homeschool. They report 19 states and D.C. require moderate reporting that includes parents notifying the state, test scores, and/or professional evaluation of student progress, and 5 states have a high regulation which may include curriculum approval by the state, teacher qualification of the parents, and home visits by state officials.

According to the latest research on homeschooled students released January 6, 2015 by the National Home Education Research Institute (NHERI) and Dr. Brian Ray, there are about 2.2 million home educated students in the United States. The research from NHERI also indicates that home schooled students “typically score 15 to 30 percentile points above public-school students on standardized academic achievement tests. In addition, they typically score above average on the SAT and ACT tests that colleges consider for admissions, and the degree of state control and regulation of homeschooling is not related to academic achievement.”

The last statement is a bit ironic and misleading. If states require no reporting of academic achievement scores then how can there be an accurate comparison between states with regulations and states with no regulations? You cannot report statistical data that has never been collected. Put another way, you cannot report an unknown as a known and call it a fact. There is simply no way to know how many homeschooled students are actually un-schooled.

However, NHERI claims to know an unknown because they report that the degree of state control and regulation of homeschooling is not related to academic achievement. How do they know? What measures have they used to draw this conclusion? Where is the scientific data that supports such a claim? Again, the answer is that there cannot be any data to support this conclusion because the data has never been gathered. It has never been gathered because thousands of parents who homeschool have never gauged their students’ academic achievement in any meaningful way that can be compared with other homeschooled or non-homeschooled students who have had their academic achievement measured.

That’s just one problem that states with no regulation or required accountability inflict on homeschooled students in their state. In Texas, in 2010 the Texas Education Agency noted that more than 22,620 secondary students, who dropped out of public school, were not listed as dropouts because the schools reported them as being homeschooled. This despite the fact that Texas has a no reporting requirement and even Dr. Brian Ray of NHERI said the fact that homeschooled students in Texas had tripled in a decade and jumped 24% in one year was, “Just ridiculous. It doesn’t sound very believable.”

Even those, who are proponents of homeschooling, recognize this designation can be worrisome when students are simply dropping out of school from pressure or an inability to pass. Senator Shapiro, R-Plano, noted, “Homeschooling is something I’m 100 percent behind. When it becomes a scapegoat for dropouts, when it becomes a bucket to not have to list this type of student, I’m absolutely adverse to that. I think it’s wrong.”

Another state with zero accountability and who is experiencing significant problems with alleged homeschoolers is in Oklahoma. Last February, 2014 Channel 2 in Oklahoma did an investigative report on homeschooling problems in the state. One parent, who homeschooled all three of her kids, noted that the lack of reporting was allowing many parents to hide behind home school while not educating their kids at all.

“Here in Oklahoma, if you say ‘my child is homeschooled’ that’s it. They can’t follow up. DHS cannot come in the home. Truancy officers cannot come to check on them.”

Another former homeschooled young man, Verdell Walker, reported similar concerns for friends he knows are not being educated while claiming to be homeschooled. “It’s kind of upsetting. I feel like kids should all get an education that’s the key to life.” Dr. Grissom, a psychologist, noted that many parents and students with mental issues use the home school out as a way to avoid detection of their problems. She also mentioned it being used as a means to drop out of school undetected.

“Because our laws are non-existent regarding homeschooling there is nothing to prosecute. It doesn’t show up on the district’s paperwork, the family is happy, the school isn’t in a bind with having that dropout number and life goes on.”

In an effort at full disclosure, I currently homeschool my son, and I teach online AP courses, and have taught in both public and private school previously. Homeschooling is a great freedom that Americans enjoy. While living overseas, I have come to understand similar freedom does not exist in places like Germany, Belgium, and other European nations. I disagree with that lack of freedom; however, as someone who has witnessed firsthand the neglect of students who were un-schooled, I believe it is important that some level of accountability be added to protect homeschooled children from neglect.

I do not believe the Constitution grants authority to the Federal government to control the education of students and believe it is a right left to the States and the individuals of those states. Parents are the primary people responsible for the education of their child, but it cannot be enough that we take them at their word. Joining homeschool organizations or associations at the local or state level could be the answer to the accountability needed. As a teacher and a coach, I am a mandated reporter. As a mandated reporter, if I see anything that looks like abuse I MUST report that information. In a similar way, these local homeschool groups would best be positioned to report child neglect if it were suspected. A simple note from parents saying they are going to homeschool and a letter from some local or state homeschool group saying the parents had joined their association would be sufficient for aiding in the accountability of homeschooling parents.

This measure may not completely solve the problems of unschooled children in the home school community but it is a far cry from zero accountability. Federal regulation is certainly not the answer but citizens must return to the assignment given them by the Constitution…we are to be guardians of liberty, protectors of the innocent. In those roles, it is fitting that we join together in our local communities to insure we are faithful to the education of our children and our future generations.