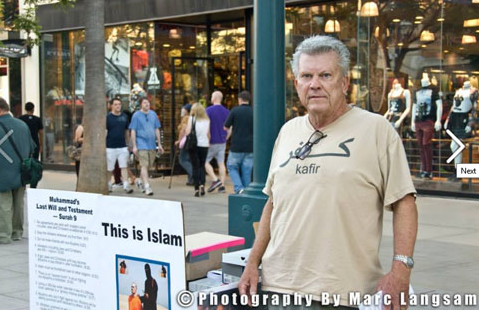 Steve Amundson is the founder of the Counter Jihad Coalition, a national activists group dedicated to educating the public on the facts and truth of Islam.  After learning that the Manhattan Beach School District was teaching Islam in a biased way (elevating Islam while denigrating Judeo-Christianity), Admundson gave the following message to the MB School Board:

The Manhattan Beach Middle School is a public school funded by taxpayer dollars and not a Madrassa funded by oil money from Saudi Arabia. Impressionable and growing minds being taught Islamic dogma before they learn the history of this great country is absurd. Public schools are for educating not indoctrinating young minds into a particular religion or ideology.

And I use the term ideology to describe Islam since religion is the smallest part of Islam. Only 14% of Islam is the Quran, 86% is the Sunnah, which is the traditions and biography of Mohammed. So if you know Mohammed, you know Islam. Mohammed who it is said, received the words of Allah, via the angel Gabriel, over period of time are what comprises the Quran. Mohammed is the supreme authority on Islam. It doesn’t matter what some Muslim tells you. And the Quran devotes 64% of its text talking about how to treat the Kafir or non-Muslim. Are you aware that Islam does not have a golden rule? That is because it tells its followers to treat unbelievers differently than believers. Kafirs have no rights in Islam. And women have many fewer rights than do men.

You know Mein Kompf is banished in many countries because of its hate. If you take out the 7% which is hatred towards Jews, does that make it a good book? Mein Kompf reads like a love story compared to the Quran.

How an ideology which condones pedophilia, polygamy and violence is allowed to be taught to young children is beyond me. But let’s look at a few historical facts:

Jihad which is obligatory for every abled Muslim has killed over 270 million people over 1400 years and continues to today.

Islam and Shariah go hand in hand, they are not separable

There is no multi-culturalism in Islam

Islam is dualistic: Meccan period was peaceful, Mohammed preached but was unsuccessful. Then came the Medinan period of violence and war. Convert, pay the Jizya or be killed led to the growth of Islam.

Two Important words you need to remember about Islam. Abrogation –the later violent verses replace the earlier peaceful ones. And Taqiyya – it is permissible to lie to a non-believer if it is to advance Islam.

I propose the following and look forward to a reply from the School Board:  that Islam be removed from the curriculum at Manhattan Beach Middle School, because as I have briefly pointed out it is an ideology not just a religion. It is more akin to Nazism than other world religions.

Starting immediately, I ask the school board to prohibit teachers from using any Islamic supplements outside of the textbook and offering the students their opinion of Islam.

Starting immediately no teacher will assign students any homework regarding Islamic dogma.