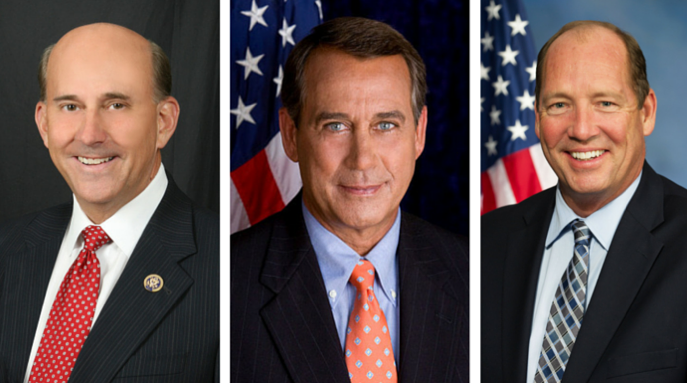 Who do congressmen fear most—Speaker John Boehner or their constituents? The answer will come on Tuesday when the U.S. House of Representatives decide on their next speaker.

In an unprecedented grassroots uprise, Republicans across the country are demanding the removal of Congressman Boehner as speaker. The Dump Boehner letter writing campaign—spearheaded by WND founder Joseph Farah—last reported that over 500,000 letters were scheduled to be mailed to all 247 Republican members of the House of Representatives. Grassroots conservatives have also been creating their own “Fire Boehner” campaigns urging letter writing and phone messages to oppose Boehner. One such example is the Bye-bye Boehner phone call campaign started by activists Cici Naples and Maria Peiro. The Bye-bye Boehner event encourages constituents to call their representatives in opposition of Boehner beginning Monday morning. Their Facebook event provides a list of all current House members along with their contact information.

Naples and Peiro, have thrown their support behind Louie Gohmert, who is one of two congressmen to come forward as candidates. In a press release, they stated: “We know that Gohmert voted against the CRomnibus. We know that he believes the top three priorities of the new Republican-majority House should be defunding amnesty for illegal aliens, defunding Obamacare, and eliminating over-regulation in the energy sector so that more jobs can be created. He has shown courage in standing for conservative principles, and we believe that as Speaker of the House, Gohmert will show that same courage in standing up to the Obama and establishment GOP agenda.”

However, House members who vote against Boehner risk losing plum committee assignment and other forms of future retribution should Boehner remain in power.

Under Boehner’s leadership, four congressmen were stripped from their committee seats in December of 2013. A GOP aide told NBC news that the Republican steering committee determined they were not “team players.” Those on the receiving end of Boehner’s punitive measures included David Schweikert (AZ) and Walter Jones (NC) who lost their seats on the Financial Services Committee, and Justin Amash (MI) and Tim Huelskamp (KS) both of whom were unseated from the House Budget Committee.

A December 2014 poll of Republicans and Independents who lean Republican found that 60% of its respondents favor dumping Boehner. Some house members agree. Representative Thomas Massie (KY) called house leadership “dysfunctional” in a recent press release, stating that he watched leadership:

House Republicans will need at least 30 votes for opposing candidates in order to deny Boehner the majority vote. That would force another vote, giving rise to the longshot of either Boehner resigning or the coalescing of enough support for another candidate to elect as speaker.