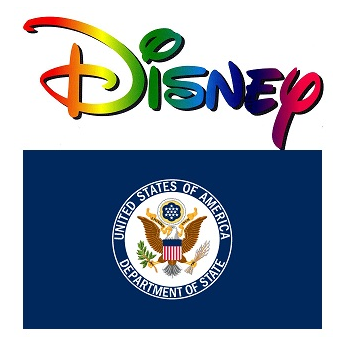 Surely this warms Obama’s icy heart. An official from the State Department told a global warming hysteria audience in Norway that he met with a Disney exec in an effort to use the much-loved characters from the movie Frozen to teach kids about climate change. Adm. Robert Papp, a U.S. special representative for the Arctic, explained that a staffer at his office came up with the idea of ads using Frozen’s main characters Elsa, her sister, Anna, reindeer Sven, and snowman Olaf to raise awareness about the area he represents.

The White House must be thrilled, with climate change being the biggest threat to our future generations and all. Papp was speaking at the Arctic Frontiers conference in Norway. The Arctic Frontiers Mission Statement reads, in part; “Arctic Frontiers is an international arena on sustainable development in the Arctic. The conference addresses the management of opportunities and challenges to achieve viable economic growth with societal and environmental sustainability.”

Papp says he told the Disney exec, “You’ve taught an entire generation about the Arctic. Unfortunately, the Arctic that you’ve taught them about is a fantasy kingdom in Norway where everything is nice.” He said as he talked, the exec seemed more and more perplexed. Papp continued his pitch, “What we really need to do is educate the American youth about the plight of the polar bear, about the thawing tundra, about Alaskan villages that run the risk of falling into the sea because of the lack of sea ice protecting their shores.” (Is that the same sea ice melting Al Gore warned about?)

For now, thankfully, the Disney executive didn’t see the magic in Papp’s plan. He reportedly told Papp, “Admiral, you might not understand: Here at Disney it’s in our culture to tell stories that project optimism and have happy endings.” For his part, Papp says this isn’t the end of the idea, “We’re regrouping on our story line and we still have Disney engaged. There’s more yet to come there.” Oh, boy, just what our kids need. Frozen Fear!

According to the National Journal, a State Department spokesperson says there was an informational meeting with a Disney executive regarding a collaboration but no plans have been made. Let’s hope this it stays that way because otherwise … well, imagine Elsa making an ice bridge, trying desperately to save Anna from an Alaskan village falling into the sea. Nightmares for the kids … thrills for mom and dad.

It’s not like Disney isn’t contributing to the eradication of the coming ice age…er, global warming…er, climate change (or, if President Obama’s science czar, John Holdren, gets his way, “climate disruption”). In 2010, Beth Stevens, Senior Vice President of Environmental Affairs at The Walt Disney Company said, “Disney believes that climate change is manmade.”
However, In 2013, a petition to Disney CEO Robert Iger by Climate Parents complained that Radio Disney was “peddling dirty energy propaganda to school kids” by partnering with Ohio Oil and Gas Association with a “music-filled roadshow being delivered at schools and fairs across Ohio. The participatory program even includes a pipeline building competition.” (Send some of those pipeline designs to Obama!)

After reading that, I’d like to believe Disney is trying to keep some kind of middle ground. Maybe they’re trying to show that we need to be energy independent without freaking out the newest generation of parents taught that the Earth is dying, the sky is falling, the next drop of water is the last and so on. Ah, wishful thinking. I’d love to know how much of our tax money, if any, is being thrown at this State Department staffers propaganda idea. How much of our tax money is being used to brainwash kids with Progressive propaganda in general? Staggering to even imagine.

Oregon PolitiChick Margie Mars is a Conservative-Libertarian, writer and parenting expert. Along with writing and designing graphics for PolitiChicks, she writes for several popular conservative and parenting websites such as Brenner Brief, Parenting, Examiner, Tavern Keepers, Parent Society, True Patriots For America and Attachment Parenting International. Margie writes as an expert on Attachment Parenting, pregnancy, childbirth, breastfeeding, child rearing and autism. Favorite political topics include the Tea Party, gun rights, the Constitution, Israel and border safety. In addition to writing she manages the social media accounts for two small businesses. Margie holds a degree in Early Childhood Education, certification in Special Needs Education and has taken courses in Legal Assisting and Political Science. In her spare time she enjoys reading political non-fiction and biographies, making jewelry, embroidery, painting and other crafts. Margie and her husband Rob have eight children (three on the autism spectrum); ages 9-27 (seven boys and one girl!) and three perfect grandchildren. You can follow Margie on Facebook: https://www.facebook.com/MargieWilsonMars8 or on Twitter at: @Margie10

Daniel Greenfield: Why the Left Refuses to Talk About Muslim Anti-Semitism

Now Our Troops Are Training Where? And Who? And Why?