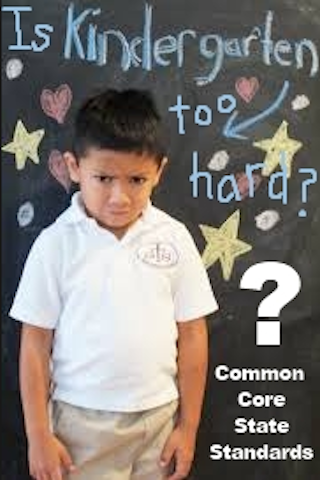 On face value, having been the parent of 2 Kindergarteners, I have to say that these standards are definitely developmentally inappropriate. Yes, both of my children were able to read before Kindergarten was over but neither could compare and contrast different informational texts.

And neither were they taught by using controversial methods and left to determine what a word meant on their own by just knowing the context of the story. At this age many kids can’t grasp that concept. They also won’t know that the same word can mean different things in different contexts.

A long time ago a pre-school teacher approached me and was very excited that the Common Core was pushing reading onto younger aged children because it would help them as students throughout their academic careers. Children learn to read and then read to learn.

The kids she was working with were not learning to read through phonics, rather they were learning through a process called “whole language.” Many advocates purport that whole language was quicker and easier for children.

Whole language boils down to teaching a child to memorize words, in whole, as they see them. They cannot sound the word out with the phonics technique so they cannot see a new word and string the sounds together to make that word.

People who like the whole language approach may agree with Kenneth Goodman who has published many papers on the topic.

To me, and possibly many of you, matching letters to sounds makes perfect sense. Whole language supporters use a completely different, and in my opinion, antithetical approach, to learning to read.

In the age of Common Core we are compounding the problem. Not only are we going to force a 6 year old child to read before he or she is ready, but we are going to use a very controversial method to do so.

Does the Common Core dictate that teachers use the whole language method? No. However, this one paragraph from this Washington Post article tends to highlight the problem very well.

Many children are not developmentally ready to read in kindergarten. In addition, the pressure of implementing the standards leads many kindergarten teachers to resort to inappropriate didactic methods combined with frequent testing. Teacher-led instruction in kindergartens has almost entirely replaced the active, play-based, experiential learning that we know children need from decades of research in cognitive and developmental psychology and neuroscience.

If you are a parent or grandparent interested in helping your child learn to read, no matter the age, I highly suggest and recommend teaching them phonics and relying heavily on vocabulary words. Children need to know the meaning of letters and sounds of them to determine new words they haven’t seen before.

Their brains make connections differently when compared to whole language and they are better able to actually read to learn in the future. They need to develop the ability to read and have their brains make the connections they need to make in order to actually think critically. And I don’t mean “critical thinking” in the way that Common Core means. The Common Core definition of critical thinking means bypassing the logical part of the brain and going straight for the emotional.

We need our children to be able to read and do real critical thinking, where their brains can think logically and make decisions based on this analytical process.

Imagine a future where the country is run by adults who never use their logical, analytical thinking processes, who, indeed, may not even know how.

I bet you never knew that the way a child learns to read was so important, did you?