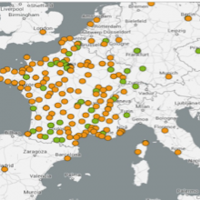 From Belgium:  On the webpage Le Monde.fr they have put together an interactive map showing the locations of rallies in support of Charlie Hebdo with yellow dots demonstrating the locations of rallies already held and green showing the location of future rallies. The hunt for the two terrorist behind the murder of 12 people in Paris, France continues into the night. Special police units are searching diligently in the forest North of Paris. While the French wait for the capture of brothers Said and Cherif Kouachi, they are demonstrating their resolve to continue with free speech.

The sentiment to maintain free speech in the face of terrorist action has spread wildly across social media with over two million people tweeting Je Suis Charlie (I am Charlie). It has grown almost hourly as the main rallying cry. The second most common symbol of support for the writers and cartoonist at Charlie Hebdo has become the pen. Make shift memorials made up of ink pens and flowers dot the grounds of various locations across Europe and especially France.

Some cartoonist have taken to illustrating the often repeated mantra that the “Pen is mightier than the sword” in a show of solidarity. Debate rages about whether the material Charlie Hebdo posted was responsible for the terrorist actions, with many on the left seemingly sympathizing with the Muslim terrorist. Meanwhile, members of the right are calling for the media to lay the blame squarely at the feet of the terrorist behind the heinous murder of the members of Charlie Hebdo and the police.

The leader of the far right in France has called for a return to the death penalty in response to the threats from terrorist groups and individuals. There may be a great deal of debate over what actions to take and how best to deal with future such acts, but it is a debate that is overdue and necessary. Perhaps the movement against this terrorist act will produce something positive but that remains to be seen and will depend largely on a very liberal French government.

Will a REAL Conservative Ever be Speaker of the House?