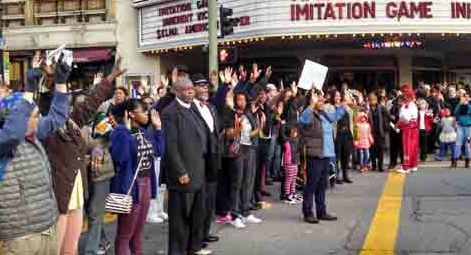 Martin Luther King Day is a time to reflect on the history of our nation. It’s a time to remember where our country came from and where we’re going. Unfortunately, Dr. King’s good name was tarnished by a group of people who were determined to undermine his work. Thousands across the nation gathered on Monday to march in the name of “protecting black lives”, sighting the deaths of Trayvon Martin, Michael Brown and Eric Garner for their march.

What many of these protestors failed to realize is that their actions defied everything Dr. King was about. Dr. King believed in peaceful protesting. That was his legacy. These protestors did the exact opposite of what MLK preached. Instead of being peaceful protestors, they do things that are destructive to their community, blocking freeways, stopping traffic and disrespecting our law enforcement.

While these protestors claim that black lives matter, they fail to acknowledge that every life matters, regardless of race. Is my life any less valuable because I’m white? It shouldn’t be. Should an officer’s life be disregarded because they’re in a uniform? Absolutely not.

While there have been some injustices with officers using excessive force, it’s entirely unfair to blame an entire population of people for the actions of a few, regardless of whether or not those actions were justified.

#ReclaimMLK.was trending on Twitter, where many users posted pictures of marches and rallies they attended.

Marching to #ReclaimMLK and say that poverty and police terror are both racist violence pic.twitter.com/QxMytpKMXz

If Dr. King were here right now, he would be disgusted by what he’s seen. One of his quotes – which these protestors failed to mention – talks about being peaceful:

“Nonviolence is a powerful and just weapon, which cuts without wounding and ennobles the man who wields it. It is a sword that heals.”

Using MLK Day as a means of pushing this anti-law enforcement agenda is downright crazy. In no way are these protestors “reclaiming” anything. What they’re doing is taking the hard work of the Civil Rights movement and using those outcomes to justify their current actions.