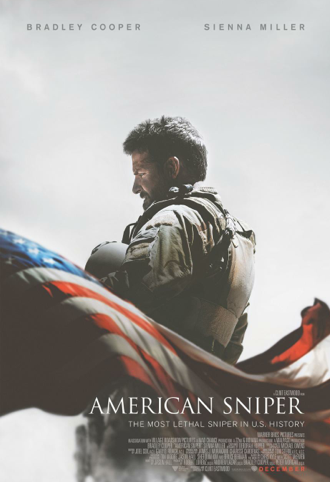 “American Sniper” is directed by Clint Eastwood from screenwriter Jason Hall’s adaptation of the book by Chris Kyle, “American Sniper: The Autobiography of the Most Lethal Sniper in U.S. Military History”. It is a powerful, gripping and revelation in American war films. The story follows the life of Chris Kyle (actor Bradley Cooper) from childhood till his career as a US Navy SEAL sniper through four tours in Iraq and 160 confirmed kills. It is the story of a true American hero and the conviction he feels to his fellow soldiers and country while showing the struggles of adjusting back into family life (actress Sienna Miller portrays Taya his wife) and society. The movie honors with compassion and dignity our American military as well as the courage and sacrifice felt by their families.

As the daughter of an Army Major who served over 20 years with several tours of duty and receiving full military honors at Arlington, I was deeply moved by the film. From personal experience, it captured why our military heroes do what they do, without the Hollywood version of portraying them as “war mongers” or “sadistic killers” as they are faced with confronting evil to keep Americans safe. The film also captured the conflicts of returning vets and the difficult adjustments made to home life with respect and realism to them and their families.

Nominated for six Academy Awards including Best Picture, “American Sniper” is a glimpse into our American warriors and an understanding of what “Duty, Honor and Country” truly means.

I Have a Dream: Black Lives Matter