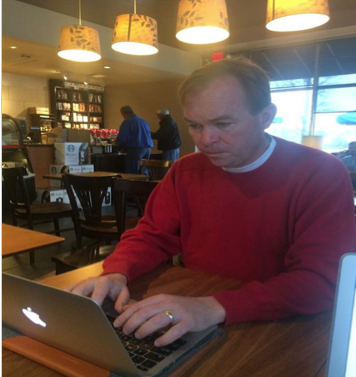 Pictured is U.S. Representative Mick Mulvaney from SC as he holds his most recent town hall meeting via Facebook. Rep. Mulvaney has regularly held such meetings and they have gained traction with his constituents. The following are a few excerpts from comments he received for holding such an open forum.

“Thank YOU for holding these Facebook “town meetings”. I lived in Connecticut for 43 years and never once had the opportunity to ask a direct question to my representatives in congress. I think it’s remarkable and I appreciate that you answer every question. I love living in South Carolina and I am proud to be in your district.”

“I enjoyed the Q & A session immensely. You handle all questions well and always with respect for the questioner. Thank you for doing this – whoever’s idea this was deserves a raise! Merry Christmas!”

Rep. Mulvaney dedicates an hour or more to these Facebook town halls in addition to scheduling meet and greet sessions around his district. The use of social media has vastly improved the ability of constituents to voice their concerns and have their questions addressed by their representatives. Below are some examples of questions and answers from constituents and Rep. Mulvaney.

Constituent: “What is next in the GOP attempt to stop Obama and amnesty?”

U.S. Rep. Mulvaney: “The Cromnibus only provides for funding for Homeland Security — which is where the President is getting the money to pay for his amnesty — until February. So we get to renew that battle, this time with a GOP Senate, as soon as we get back in January.”

Constituent: “What about a move to restrict budget votes to single appropriation bills rather than giant Omnibus bills that hide ridiculous spending? Do we have any appetite for that move once the GOP takes both houses?”

U.S. Rep. Mulvaney: “No…not yet…my guess is that we will continue to see these huge bills until you have a president (of either party) who threatens to veto them. I could be wrong…and the appropriations process MIGHT start working again the way it should…but we will know for sure in the next 6 months or so.”

Constituent: “With the “new” people coming in to serve in Jan., why can’t the Reps. go full force on things “the people” really want? At least vote like what most of us really want. Let the president veto as he will, but show you really care about this country and the voters. We need strong leadership in the Republican Party and don’t back down.”

U.S. Rep. Mulvaney: “That is exactly what we will do…we will approve Keystone, restore the 40-hour-work week, roll back EPA rules regulating roadside ditches, repeal the IPAB part of Obamacare…all good stuff. It will be fun to watch the President try to veto all of those things…”

Most of the questions centered on the issue of the Crominbus bill and immigration. A few questions veered into other topics but one recent story from Fox News may have brought the most interesting response. A constituent asked about a recent story that included comments from Jeb Bush that he was actively seeking to run for the 2016 Presidential nomination. The exchange between a South Carolina constituent and Rep. Mulvaney was telling.

Constituent: “I just heard on FNC that Jeb Bush has said he will “actively be considering a run for the White House” and that he will be a strong candidate for POTUS. With the negative perception many people have for George W and that the Bush family has the money to fund their “princes” for them to run for POTUS, I have my doubts that a Bush will be a good choice as the Republican nominee. Do you think a Bush can win the presidency? And, why would Jeb Bush be a good candidate for our party?”

U.S. Rep. Mulvaney: “I think it is safe to say that I wouldn’t be supporting Jeb Bush for the GOP nomination.”

This Advent Season, Focus on HOPE

Newton Superintendent Says “It will take 15 years to heal”