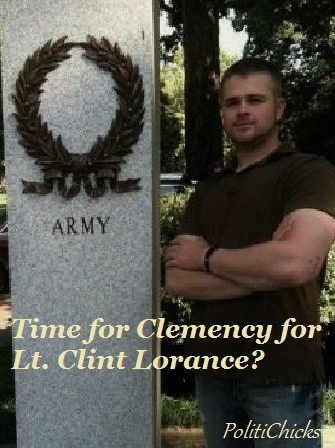 Earlier this year and again last month, I wrote about our Military, the ROE’s they have to follow, and the fact that our troops have to make split decisions on the battlefield which could either result in the deaths of themselves and their platoons or possible prison time.

One specific case involves 1st Lt. Clint Lorance who had to make such a decision.

Clint was in charge of an Army platoon stationed near a Taliban friendly village in Kandahar Province, Afghanistan. Intelligence reports showed that terrorists had been using motorcycles to implant IEDs and also used by suicide bombers to drive into groups of innocent civilians or military patrols and detonate themselves. The former platoon leader had been killed, as were others of the unit because of insurgent attacks. Clint had only been in charge for 96 hours when he and his men came under enemy fire their first day out. The second day, while patrolling a road known to be used by the enemy, three men on a motorcycle sped towards their position. Lorence had to make a split decision to either let them go hoping they weren’t terrorists ready to kill his men, or engage in a fight. He chose to give permission for his men to fire at them. Two were killed.

At his court martial hearing at Ft. Bragg, the Army claimed the men had not been enemy combatants; Clint is now serving a 20-year sentence at Ft Leavenworth for two counts of murder and attempted murder.

New evidence in the case has been brought forward and sent to Brig. Gen. Richard D. Clarke, the 82nd Airborne Division Commander who will decide if Clint Lorance can receive clemency.

According to documents, the Army has evidence linking Afghan military-aged males involved in Clint’s court martial case, to improvised explosive devices (IEDs) as well as IED attacks and terror networks in Afghanistan.

“The government failed to disclose this information to the chain of command, council for the defense and the court martial. These significant failures strike at the very heart of American due process and show that the government violated its discovery and disclosure obligations under ICMJ Article 46, RMC 701, Army Regulation 27-26 and well settled Supreme Court and military case law. The newly discovered evidence, standing alone or in combination with the many legal errors already raised, shows that this court martial is not correct in law and fact.”

Only moments after Clint’s men were given permission to fire on the three speeding towards them, there was a second engagement in which military aged males were acting suspiciously and communication intercepts revealed their intent to “do something” to Americans in their sights. Two insurgents were shot and killed by soldiers from another platoon.

Meanwhile, another motorcycle rider was caught and detained and inspected; his hands tested positive for homemade explosive residue (HME). Mohammad Rahim was captured near the village, with a gunshot wound, and upon capture, he too tested positive for HME before he was treated for his wound at Kandahar Airfield.

The defense team for Clint Lorance believes this, scouting by the enemy and more evidence shows the hostile intent and activities of Afghani military aged males during the time before, during and after the incident.

Clint served 10 years with a spotless record in the U.S. Army and is well respected by his platoon mates, his family and friends. He does not deserve to be in prison because of ROEs and combat pressures made by those who have never engaged enemies on the battlefield.

Clint’s mother Anna Lorance appeared on Fox, one of the very few news outlets covering the case on Dec. 15th.   She spoke in defense of her son, “We have the evidence, you have the evidence in your hands that the jury did not have. I know you to be a loyal man and a true man to your soldiers of the 82nd Airborne. My son too was a soldier in the 82nd Airborne. He’s your soldier…Clint is a young man that would have never seen the inside of a jail cell had he not chose to serve his country and that is sad.”

According to the article, Fox News legal analyst Peter Johnson Jr. noted that after reading the document papers, the Army in fact “withheld an awful lot of evidence in terms of terror ties, the witnesses [and] intelligence.”

Clint Lorance is not the only member of our military who is serving a prison sentence for disobeying dangerous ROE’s. Too many who face daily attacks, insurgents, and combat have succumbed to what boils down to war legalities against enemies who don’t play by rules or have any respect for our government’s legalese which tie the hands of our troops.

It’s time for Americans to realize the additional pressures our military faces in the so-called war on terror. For our troops to serve their country, only to face the possibility of serving prison time is a travesty. It’s time more people spoke up, and let their representatives know we demand our government to reevaluate the ROE’s and also look into not only Clint’s case, but others as well. For the sake of our military men and women who serve and deserve better, and their families, it’s time for justice, and time for clemency.