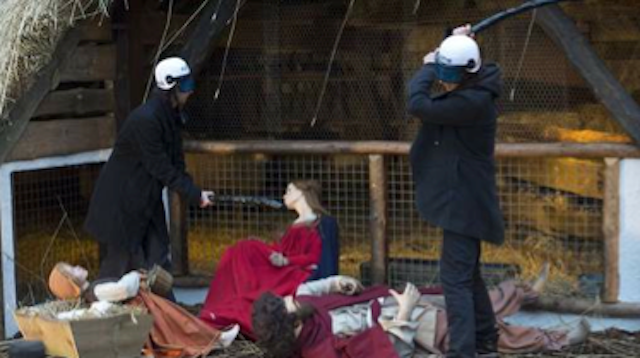 Belgium Town Center:  Two activists dressed as police officers and believed to be members of a feminist group, attacked a Nativity scene to “protest the treatment of poor immigrants.” After forcing their way into the Nativity scene, the two put up a banner which read “F***the poor.” They preceded to beat the mannequins of Mary and Joseph.

One of the activist reportedly stated,

“We have started to expel this poor family that probably entered the country illegally and shamelessly wanted to settle on our beloved market square. With this ironic action we wish to voice our support for the Michel Government and support its new measures that deal with those that are really responsible for the crisis.”

Belgian police were able to apprehend the two feminist and restore order to the Nativity scene without further incident.