On December 28th, a concerned woman posted a link to a vulgar YouTube video on the social media page Online Protest for Facebook to Remove “Kill the Police” Pages asking its 188k members to report the video to Youtube.

The YouTube video (no longer available) was entitled “I challenge you to Kill a Cop.” It was originally posted on August 26, 2014, the day of Michael Brown’s funeral in St. Louis. Here is the screen shot capturing the only remaining image of the video link: 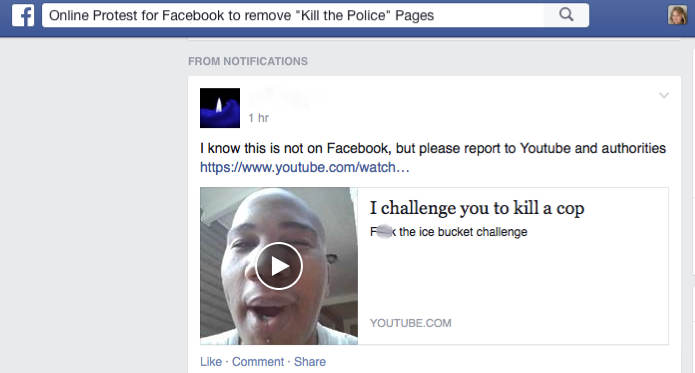 Here is the transcript of the video which I captured before it went down:

Why don’t you guys just f***in’ just walk up to the next cop you see and blow these mother f***ers heads off?

Everybody’s talking about the Ice Bucket Challenge. Well, here’s a Cop Challenge.   Walk up to one of the mother f***ers and shoot them and just blow their head off. This is my challenge to the whole world.” 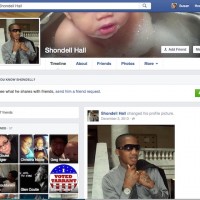 Mr. Hall is a self-described “Young, Gifted Educated Black” man who is raising a young son to embrace his lifestyle. Apparently, he is an equal-opportunity videographer who advocates the killing of all police, officers regardless of color.

When the link appeared on Facebook, YouTube had already recored 6,475 views. Within two hours of the report, the video had gained over 6600 more views and over 900 negative votes. Several comments from viewers, as blunt and vulgar as the video itself, railed against the author, demanding him to stop his abuse of police and calling him out for his inappropriate video content.

Apparently in response to the mounting pressure from viewers and within two hours from the request to report the video to YouTube, the video’s creator, one Shondell Hall, abruptly pulled the video and removed all other videos (including one entitled “F*** God F*** Religion”) from his YouTube channel.  (His channel, by the way, is  entitled, ‘I’ll Take Your Bitch‘…)  Before pulling the video, Hall was unrepentant about his incitement to murder, actively posting crude slurs and comments as views were beginning to challenge him and taunting those who commented negatively.

In the end, social media shaming or unwanted scrutiny apparently motivated Shondell to shut down his kill a cop video challenge.