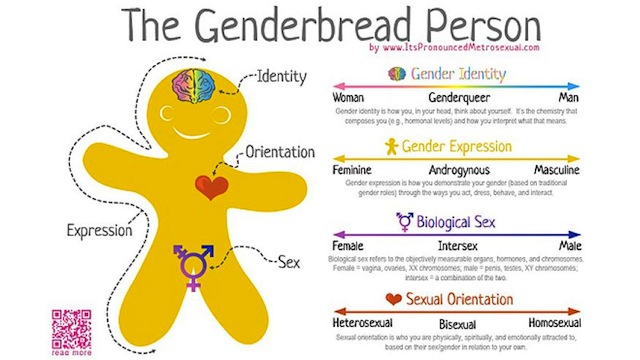 Back in prehistoric days – you know, the 60’s – Sex Ed was taught in Eighth Grade Science class. The boys were taken out to the gym, where all the coaches could keep a stern eye on them, and the girls stayed in the classroom with some women teachers. An instructional video went through the actual mechanics of the procreation process with drawings in black and white, followed by hideous pictures of what STD’s would do to you, similar to the Meth pictures you see today in the “Don’t Do Drugs” campaign. That only happened once, and nobody dwelled on it. On to math class. If an adult were to talk to a child about condoms and cucumbers, they would have probably been arrested.

No students wondered if it was a good idea. Sex outside of marriage still happened, but the risk and responsibility was where it should have been. Killing your baby wasn’t available as a way out. The government didn’t subsidize your income for each baby. You were expected to pay the consequences and take responsibility for your own actions. When girls got pregnant, some went to Aunt Susie-Q’s for a few months, which meant she had her baby and put him or her up for adoption; a few stayed home and grandparents helped raise the baby; some had shotgun weddings, where a young man married his pregnant girlfriend out of fear of her dad; some were in love and just got married sooner than expected.

Fast forward to today. People who make money aborting babies are in charge of Sex Ed programs in public schools. That is insane! A child’s sense of modesty is now torn down through inappropriate TV/radio ads for products that need to be sent in “discreet packaging”, News that includes soft porn like Victoria Secret models on parade in their undies, and nearly nude giant size posters at the mall supposedly selling clothing. “Family” shows hint that dad has dirty magazines, and maybe a girlfriend on the side, and that if you’re in high school and a cool kid, you have had multiple sex partners, and that your counseling should come from the government… who has employed Planned Parenthood to teach you Sex Ed for profit. How in the world did we get here?

There are some books on the required reading list are far too salacious, and the people that are recommending them are CREEPS! Why would decent adults promote such a thing? Parents, protect your children. Stop just floating down the river because it is hard to swim upstream. I know it seems overwhelming or confrontational. It got this way a little at a time, and it will only get better if people start taking a stand for decency. Our society is falling apart. Much of it is because of indecent exposure. Public schools? Yes, as long as we have education, not indoctrination. Indecent content? No, absolutely no place for it in school.

“Parents in California are dismayed by the sex education their 9th-graders are receiving at school from the local Planned Parenthood. So the parents are speaking up and working to do something about it.

“This is disappointing to us,” one parent commented, “because we are actually strong supporters of teen sex education in a peer environment to complement our home-based discussions.”

Do you think Planned Parenthood should be leading sex education in public schools without showing parents what the course will include?”

Maybe this would be something good to point out to Megan Kelly on Fox about Common Core’s tendency to “hide” the details from parents.

This is a call to action. Concentrate on your local school, church and community first, and then grow from there. With Common Core repealed in Oklahoma, Jenni White is changing directions to help train folks to take this bull by the horns. Be looking for future information on a group called Band of Mothers.

Is Barack Obama Unaware His Words Do Not Disappear?