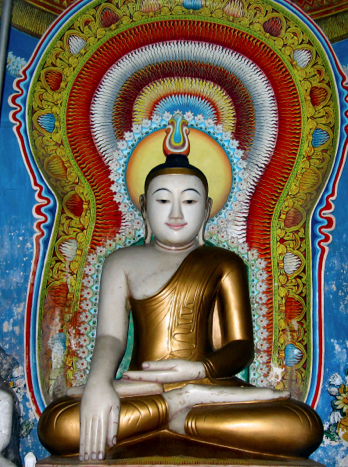 If prayer isn’t allowed in school and Bibles are banned then why is Buddhism allowed?

Follow me for a second and I will explain what I’m talking about. I’ve told you all about Social Emotional Learning and how there’s a huge push for SEL in education and you can find it at pretty much every public school in the nation, to some degree or another.

Just to revisit the definition of SEL I will remind you that Social Emotional Learning is the teaching of the ability to cope with social or emotional situations. This is usually something a child picks up from his or her home.

The reason I lump Social Emotional Learning together with religion, prayer, and Bibles here is because of research that my colleague, here in Oregon, has stumbled on and has been pursuing to whatever end she may come to.

There are many programs in schools now that teach “mindfulness.” Through Yoga and other means the schools are teaching children to get ahold of their emotions, to have better self-control and generally be calm.

Here’s the definition of mindfulness according to Wikipedia:

Mindfulness is “the intentional, accepting and non-judgmental focus of one’s attention on the emotions, thoughts and sensations occurring in the present moment”,[1] which can be trained by meditational practices[1] derived from Buddhist anapanasati.[2]

So the definition of mindfulness is that it can be trained through Buddhist practices.

We’ll look at the definition of Buddhism here:

Buddhism is a nontheistic religion[1][2] that encompasses a variety of traditions, beliefs and practices largely based on teachings attributed to Siddhartha Gautama, who is commonly known as the Buddha, meaning “the awakened one”

So the tenets of Buddhism, through mindfulness and Social Emotional Learning are allowed in public school classrooms.

I think I’ve painted a pretty clear picture of why I asked you the question at the top of the article, “If prayer isn’t allowed in school and Bibles are banned then why is Buddhism allowed?”

Just in case this isn’t an effective enough persuasion for you to see that this is a religion thing let me direct you to the article my colleague found at Edutopia.com. I’ll remind you that Edutopia is George Lucas’s foundation that believes that kids are not inherently born with the ability to cope or the inability to cope well with social or emotional situations. They believe that by effecting policy change to funnel money into schools to support the teaching of emotional intelligence is a great opportunity to help children.

The article very clearly states that SEL is spiritual. It gets children to ask the big questions like “what is the purpose of life?”

I would like to copy and paste the entire article for you but instead I will show you some of the main ideas. Edutopia is interviewing Jeffrey Kress, Ph.D., an associate professor at the William Davidson Graduate School of Jewish Education, Jewish Theological Seminary, in New York.

Do you think there is a spiritual dimension to SEL and if so, how would you define it?

Dr. Kress: I do, and I think it manifests in two main ways: internally and externally. First, there is an introspective, contemplative side to spirituality that connects to SEL elements of self- and emotional-awareness. Spiritual practitioners often use mindfulness or a sort of attentional focus and self-control to achieve spiritual awareness.

What are the challenges of getting adolescents to think about the “big questions” and what does SEL have to do with it?

This can and should include a look at their potential contributions to their school and the wider world around them. They can also provide support when circumstances in students’ lives make an affirming spiritual-SEL stance difficult to see.

What role do you think reflection and service play in SEL and how do these connect with spirituality?

Dr. Kress: Spirituality has an element of introspection and self-awareness, and reflection that, when scaffolded by caring educators, can help foster the habits needed to monitor one’s emotions and to help build a sense of identity, who one is. Reflection can also focus adolescents on the impact they have, or can have, on their school, their community, and on the world. In this way, it is a complement to service, which, at root, is a chance to “make a difference.” In fact, it is helpful to link the two.

Dr. Kress raises the question of whether schools can be venues for deep conversations about matters of the spirit and about transcendence. Admittedly, religious schools are much better equipped to open up a sustained dialogue on such topics. But it’s not impossible for public schools to put these matters on their agendas, perhaps through the study of religion and religiosity and the concept and quest for transcendence as part of philosophy, history, social studies, civics, current events, or even psychology.

I have no problem with high school students having elective classes that might include a class on religion that covers all of the main religions. Teaching kids about the tenets of Buddhism would be a part of this class.

However, when the tenets of Buddhism are being taught to children through a focus on “mindfulness,” from the age of Kindergarten on, and controlling their emotions through this Buddhist practice – well, that, I have a problem with.

If you are fair minded, no matter your religion or non-religion, you will see that this is the same thing as if public schools decided to go by “the golden rule” and taught children to pray for guidance and peace throughout the school day. Instead of getting in the different yoga positions we make them get on their knees and put their hands together. Instead of focusing on their emotions they are focusing on God. Instead of asking how they can affect the wider world they are asking how they can spread the Gospel to the far corners of the earth.

For Christian parents, this should be a problem.

For anyone who cries, “Separation of church and state! No religion in schools!” this should be a problem.