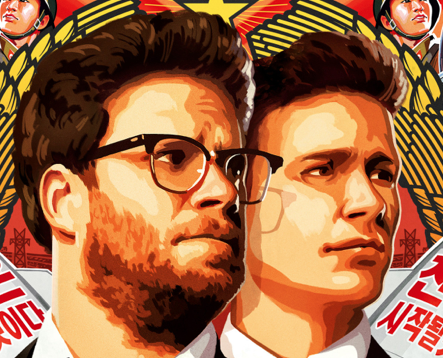 Sophomoric? Yes. Over acted? Yes. Unbelievable premise? Yes. But “The Interview” was a wonderful film to see. The theater was packed and each of us sitting in the audience was enjoying the film for what it represented to our freedom of speech (plus several laugh out loud gags).

Directed, starring and written by Seth Rogan, “The Interview” is a fun, but mostly eye rolling comedy about a seedy Hollywood tabloid show invited to interview North Korean leader, Kim Jung-un, who is a fan of the show. Dave Skylark (James Franco) and Aaron Rapaport (Seth Rogan) have worked together for 1000 episodes of the show, “Skylark Tonight” and to impress their fellow journalists with a more serious theme, have garnered this interview. The CIA (Lizzy Caplan as Agent Lacy) then asks the pair to “take out” the North Korean dictator and with an “Animal House” demeanor of espionage, the two agree to do so.

I was surprised to see Kim Jung-un (actor Randall Park) presented as a clever manipulator, instead of the buffoon that most Americans perceive him to be as he convinces Dave Skylark (Franco) that they are best “bro” friends and life for the people of North Korea is good. Aaron Rapaport (Rogan) sees through the misconception and eventually convinces his star (Franco) to face the reality of the leaders deception and cruelty (along with Skylark discovering a grocery store in Pyongyang only carried fake fruit).

The interview with Kim Jong-un then changes course live on the air with the host skewing the dictator till he breaks down in tears and humiliates himself in front of his people and the world. Skylark and Rapaport eventually are forced to “take out” the dictator in their efforts to escape.

As a comedian and comedy writer, I must say, the plot seemed strange for Rogan to conceive. My instincts about the film were as if a script was handed to Rogan and he was asked to make it humorous (something I personally have had to do numerous times). It did seem to be deliberate in its purpose to humiliate the North Korean dictator primarily to his people instead of being what a comedian would take license to portray. However, we will save that theory for the countless films yet to be made about the making of this film.

Regardless, the film was mostly laugh out loud grade school humor and a fun (and patriotic) Saturday afternoon. Small children should be left at home since much of the humor was at best “potty-mouthed”, but adults will have a few good laughs.

Judge For Yourself: Are These the Most Racist Comments by a U.S. First Lady?

Change Your Thinking on the Role of Government‏