“They need gratitude, not attitude!” Ann-Marie blurted out as we left the last police station on our PolitiChicks Gratitude Campaign of delivering cookies to precincts throughout Los Angeles. Our day was filled with laughter and tears as we drove from station to station. It was a day I will treasure always, spending time with a good friend and doing something that meant so much to us and to our police officers in their time of need.

The day began as I arrived at Ann-Marie’s home. She was feverishly working to spread the word of our campaign. She had written the following note to place with our cookies to the officers:

I felt overwhelmed at the message, phrased so perfectly for what we were about to do. No words I could express would be more heartfelt than what she had written.

We then set out to the local grocer to purchase packages of sealed cookies–4 dozen per precinct, plus bags of wrapped candy, and filled them into large red gift bags. We adhered the message to the outside of the bag, so it would be the first thing seen by the officers as we presented our gift. 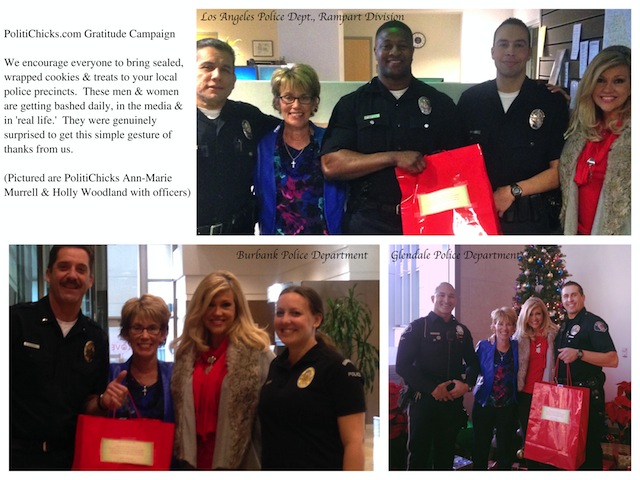 We entered the Burbank Police Department for our first delivery and were greeted at the front desk by a young policewoman. Although Ann-Marie had contacted the stations before we arrived, not all were aware of our coming gesture. The young woman asked how might she help as we presented our gift bag.

With a professional demeanor she began to read the note, and as the realization of the words hit her, she smiled with humility and gratitude.

“Thank you, thank you!” she said as she then enthusiastically said, “Wait here!”

Soon Lieutenant John Dilibert was retrieved from the back as he entered with a big infectious smile.  We continued to explain why we were there as other officers gathered around as photos were snapped and officers thanked us. We said, “No, no, we want to thank you!” as even more officers took notice of what was happening.

As we were leaving, an officer yelled out, “Tell people not to be so angry at us when we write tickets, too,” reminding me that their contact with the public in the line of duty must be mostly negative. As I looked at these officers, I could see the young female officer was pregnant. These were real people, with real lives and feelings, and what was being said about them now by the Al Sharpton’s and Bill DeBlasio’s did have an effect.

Next we arrived at the Glendale Police Department. Finding a parking space was difficult since Ann-Marie and I were excited as we arrived. The Elvis-sounding GPS Ann-Marie was using was being ignored as I rambled on in a caffeine stupor (yeah, Starbucks). The joy we felt as we went on our mission made us feel silly.

Officer Vincent W. Jackson and Officer Paul Lopez spoke with us at the Glendale station. Once again, they were surprised and deeply touched by what we were doing. Both Ann- Marie and I felt moved once again by their heartfelt and all too human reaction.

The woman at the front desk, eyes welling up with tears, said, “You don’t know how much this means to us. All the negativity and anger we hear from everyone hurts a lot; we are just trying to do our jobs.”  We realized that even personnel working at the stations felt affected by what was happening in places like Ferguson–and it comforted us knowing that so many other PolitiChicks across the country were delivering their Gratitude Cookies, too, and must be hearing the same.

Our last stop was at the Los Angeles Police Department, Rampart Area. We had to concentrate a bit more on where we were going since the area appeared more dangerous. We once again went to the front desk where a polite and professional officer was working. After reading our note, he asked us to please wait for another officer to speak with us. Officer Mariscar soon entered from the back and approached us with a serious expression. He and other officers had read the note and well, I find it hard to write the emotion they conveyed.  They told us about the violent chants they’d been hearing, such as, “What do we want – Dead Cops!”  So our simple bag of cookies meant a lot to them.
As another officer had us stand together for photos, she asked that we all move closer together. I went to put my arms around the two officers next to me and could feel the vest under their uniform they were wearing. My heart sank and tears filled my eyes as I looked at Ann-Marie, both of us thinking of the anger and hatred happening in America, mostly directed against all police officers.

Mostly what we, as PolitiChicks, want to convey to the Al Sharpton-types is that YOU DO NOT speak for all of us! What you are inciting is hatred and violence against the vast majority of officers who will protect you and your families with their lives! Happily, the profiteers and race baiters are not the only voices being heard anymore.  We, too, have a voice, but we will be using ours for love, not hate.

As we started to leave LAPD, one officer said to me, “You don’t have to give us cookies or anything. A phone call with thank you means the same, just a thank you is all we have to hear.” And another female officer approached us and said,

“Most of the people who are out there protesting against us are people who don’t work for a living and are simply doing whatever they’re told to do. We know the vast majority of people out there are good; they’re hard-working and they’re taking care of their families, just like we are.”

The difference is that police officers like the ones we met are not only taking care of their homes and families, but ours as well.

We hope you’ll join us in continuing to show gratitude across the nation—either with a bag of (sealed) cookies and treats, or just by calling your local precinct and saying ‘thank you.’ And let’s keep this Gratitude Campaign going, year-round.

Newton Superintendent Says “It will take 15 years to heal”

If the Obama's Were Discriminated Against, SO WAS I!