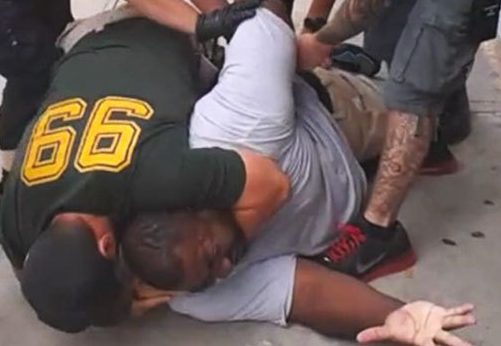 Eric Garner died a patriot. Yes, you read that right. Eric Garner has more in common with the colonists at the Boston Tea Party than he does with Michael Brown. Eric Garner died while being arrested by New York City police last July. His crime? Selling untaxed cigarettes. Garner’s actions were premised on the same notion that spurred the colonists to sabotage tea shipments in protest of England’s Stamp Act of 1765.

In a City where you may not be arrested for marijuana possession or violating immigration laws, where illegal alien criminals will not be deported, you can be certain that the sacred lifeblood of Big Government – taxes – will always receive aggressive criminal enforcement, regardless if those taxes make the poor poorer or kill husbands and fathers like Eric Garner.

Just four weeks ago Mayor De Blasio proudly announced that New Yorkers would no longer be arrested for low level marijuana offenses because it would allow police to put “more time and energy into fighting more serious crime.” Apparently he meant “more time and energy into fighting” the victimless but “serious” crime of untaxed cigarettes. Bilious liberal hypocrites like Mayor De Blasio know who the real criminals are in New York City. It’s those like Garner who Just Say No to tyrannical taxation.

Why the fuss over a cigarette tax? Money. Big money. New York imposes the highest tobacco tax in the nation – a $5.85 tax on every pack of smokes sold in the City, making the total cost of a single pack approximately $14. New York politicians benefit from this massive tax revenue windfall, but it has severe consequences. First, the tax harshly punishes poor people and, second, it unnecessarily foments widespread criminality.

Poor smokers in NYC spend nearly one-fourth of their income on cigarettes because of this oppressive tax, and for those obsessed with income disparity, this compares to 2% spent by wealthier smokers. It is well known that smokers are disproportionately poor. This means New York politicians know their cigarette tax is brutally regressive, that is, it disproportionately punishes the poor.

It is no small irony that New York, the Flagship of Liberalism, the Bluest of the Blue States and Champion of the Poor, imposes the highest cigarette tax in the nation on its poor, and in so doing makes them dramatically poorer. And despite politicians’ claims that high tobacco taxes reduce smoking, one study found no such decline in smoking among poorer New Yorkers between 2003 and 2010.

Crime is the other consequence of this oppressive tax, fostering a burgeoning black market in New York, again disproportionately among poor and minorities. By contrast, there is no such crime problem in neighboring Virginia, which charges about 1/20th the cigarette tax of New York. New York’s oppressive taxes promote criminal enterprise just as Prohibition promoted widespread bootlegging.

What is the cost? Poor people become poorer. Desperate people become criminals. And Eric Garner is killed by Government agents because New York politicians will not tolerate anyone, regardless of color, challenging an oppressive tax.

Police are the convenient whipping boy for government tyranny. In a pernicious display of cynicism, those same politicians like Mayor De Blasio are now exploiting Eric Garner’s death to inflame racial passion and anger – deflecting the focus away from politicians who imposed the confiscatory tax laws – and redirecting public anger at the police sent by those politicians to enforce those laws. The media and the race-baiting riot mobsters are all too happy to roll out the false racist narratives complete with professionally printed signage within hours. Anything to protect the life’s blood of the liberal political machine – taxes— and those politicians who invent them.