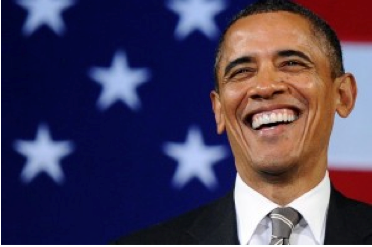 In recent months, President Obama has been making appearances in the media and college venues, taking credit for improvements in the U.S. economy. And by several measures, the U.S. economy has, in fact, improved over the past 6 years. Indeed, home prices, the Dow Jones, the gross domestic product (GDP), and industrial production have all increased since the day Obama took office.

Yet, there are many other indicators that show the U.S. economy is NOT much better at all. So, while the president touts his economic policies, American people are just not buying it anymore.

In fact, according to the latest CNBC All-America Economic Survey:

“Despite an improving economy and the lowest unemployment rate in six years, Americans’ views of President Barack Obama’s economic leadership stands at the lowest level of his presidency.

Just 24 percent of Americans say they are extremely or quite confident in Obama’s economic policies and goals, down from 33 percent when the question was last asked in June 2013, the previous low-point of the Obama presidency. And 44 percent of the public say they have no confidence at all in the president on the economy, tied with the prior low in August 2012. (Prior surveys were conducted by the NBC/Wall Street Journal).”

How can this be? With the unemployment rate now fallen to 5.8%, we’d think that voters would be happy with the progress the Obama administration has made with jobs.

Unfortunately, however, there are still a lot of people looking for work, many who have gotten discouraged and dropped out of the labor force, and many who are working only part-time when they’d rather have full-time jobs.

In fact, according to Forbes, the actual unemployment rate is closer to 12.6%:

“Despite the significant decrease in the official U.S. Bureau of Labor Statistics (BLS) unemployment rate, the real unemployment rate is over double that at 12.6%. This number reflects the government’s “U-6” report, which accounts for the full unemployment picture including those “marginally attached to the labor force,” plus those “employed part time for economic reasons.”

These numbers mean the U.S. has nearly 10 million workers only marginally engaged in their work situation. They don’t contribute their full potential to their households, the economy or society in general. While reporting a low, declining unemployment number may comfort people, we can’t ignore the millions of workers feeling the pain of the real unemployment number rising from 12.4% to 12.6% last month.” 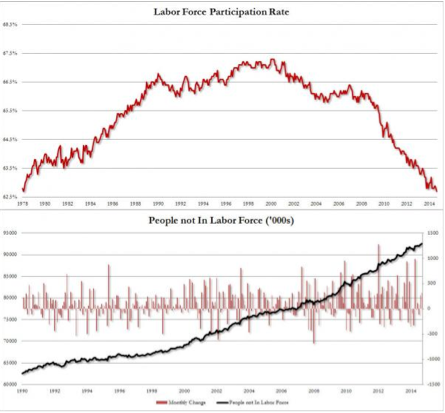 To the left is a chart showing the Labor Force Participation Rate.

Zero Hedge reported that the Labor Participation Rate dropped to a 36 Year Low, which is a record 92.6 million Americans NOT in the labor force.

Not to mention the fact that the poverty rate has climbed since Barack Obama took office. Through 2012, the most recent year available, the number of people in poverty had risen by 2.9 million. About 50 million Americans live below the poverty line, which the federal government defined in 2012 as an annual income of $23,492 for a family of four.

According to the Washington Times:

“In spite of the administration’s anti-poverty efforts, however, the government reported this week that poverty by some measures has been worse under Mr. Obama than it was under President George W. Bush. The U.S. Census Bureau reported that 31.6 percent of Americans were in poverty for at least two months from 2009 to 2011, a 4.5 percentage point increase over the pre-recession period of 2005 to 2007.

Of the 37.6 million people who were poor at the beginning of 2009, 26.4 percent remained in poverty throughout the next 34 months, the report said. Another 12.6 million people escaped poverty during that time, but 13.5 million more fell into poverty.”

Since President Obama took office, the median income rate has also continued to decline, according to Census Bureau data through 2012: 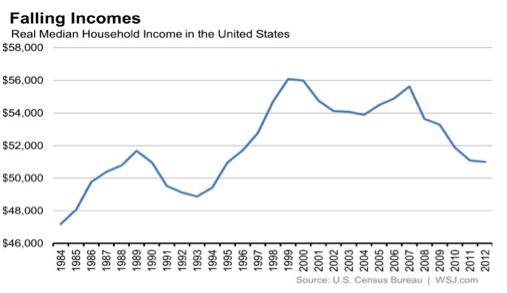 Also, how about the number of people who are now on food stamps? A record 47 million Americans currently receive food stamps, about 13 million more than when Mr. Obama took office. 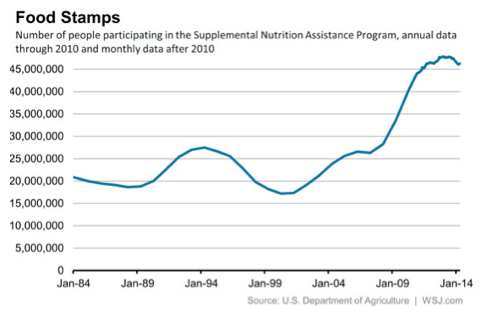 Participation in the food stamp program has gone up 70 whopping percent since Obama took office. In fact, almost 1 in 5 households (about 19.75 percent) celebrated this past Thanksgiving on food stamps.

Yet, as President Ronald Reagan once wisely stated, “We should measure welfare’s success by how many people leave welfare, not by how many are added.”

The fact that so many Americans have to rely on this government supplemental Nutrition Assistance Program (food stamps) reveals just how our current economic policies are truly failing U.S. citizens.

Last but not least, lest we forget to mention our national debt. According to the U.S. Treasury Department, the U.S. national debt hit $18 trillion for the first time last Friday, soaring nearly 70 percent under President Barack Obama. When he took office, it stood at $10.626 trillion, and it’s risen nearly $7.5 trillion in the past six years.

Remember when Obama called President Bush ‘unpatriotic’ for adding $4 trillion to the national debt? Here it is:

Indeed, there are signs of life in the U.S. economy: gas prices are down, consumer confidence is up, the Dow Jones is up, and the GDP is rising. That’s fantastic. Yet, the high U-6 (nearly 12%) unemployment rate, increased poverty level, fallen average household income, increased dependency of food stamps, and $18 trillion national debt are certainly nothing for President Obama to brag about.

Daniel Greenfield: How to Make Your Own Race Riot