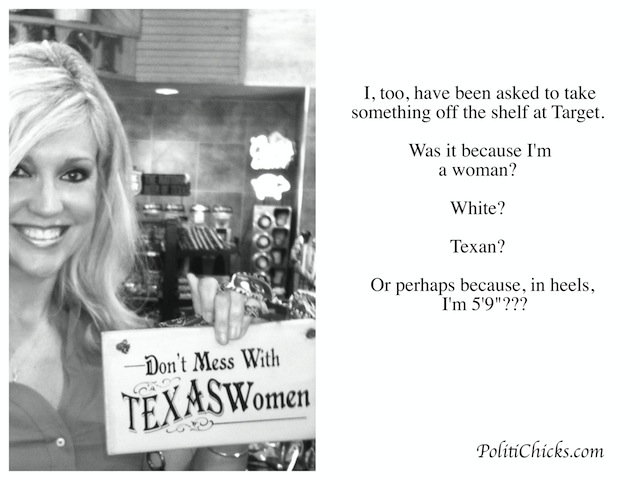 Recently–or more accurately, since around 2008–Barack and Michelle Obama have been citing instances in which they’ve been discriminated against.  During such a racially volatile time as this, you’d think they would be discussing the many ways they haven’t been discriminated against, such as becoming the President and First Lady of the United States of America.  But nope.

Incident:  Almost every time I shop, I’m asked to get something off the shelf for someone.  Is it because people are anti-woman or because I look like a grocery worker?
Reason:  NO.  It’s because in heels, I’m around 5’9” tall.  Short people simply can’t reach the top shelves and ask any random tall person for help.

Incident:  This summer several people asked me where they could find shopping carts.  Is it because I’m a woman?
Reason:  NO.  It’s because I was wearing a red short-sleeved polo shirt.  I don’t do that anymore.

Incident:  When walking to the restroom in a very fancy restaurant, a diner asked me for a refill on her coffee.  Is it because as a woman, I should be waiting tables?
Reason:  NO.  It’s because I was wearing a black pencil skirt and a white button-down blouse—the exact “uniform” the wait staff was wearing.

Incident:  About 12 years ago my husband and I were thinking of remodeling our kitchen and were looking at different prototypes in a very fancy kitchen remodel store.  We asked an employee about a certain kitchen style and she said, “This one is very high-end—let me show you something more affordable.”  Is it because we looked poor?
Reason:  NO.  When we asked why she thought that, the employee said, “When you walked in, I clearly heard your husband say, ‘We can’t afford anything in here.’  She was correct on all accounts…

Incident:  About 5 years ago my husband and I were asked to leave the Jacuzzi at a Mexican beachside hotel.  Was it because we were white?  Or Southern?
Reason:  NO.  It’s because we were staying at the hotel next door but our pool was too crowded.  We didn’t belong there and the pool employee knew this…

Incident:  This summer, Morgan Brittany, Dr. Gina Loudon and I were repeatedly asked directions and how late the farm was open.  Was this because we were women and people were anti-feminist?
Reason:  NO.  It’s because we were dressed in period costumes like everyone else who worked at the farm.

However, the following are REAL cases of discrimination in America.

Morgan Brittany, Kevin Sorbo, and most “outed” GOP actors/actresses:  Not hired by Hollywood

And unfortunately this list goes on and on, and is very, very real.

When you live your life with “VICTIM” tattooed across your head and heart, that is exactly what you’ll be the rest of your life. My hope is that those of us with common sense will continue to point out the difference between “discrimination” and “reality” and can help prevent future generations from following the example of victimhood by the president and his ilk.