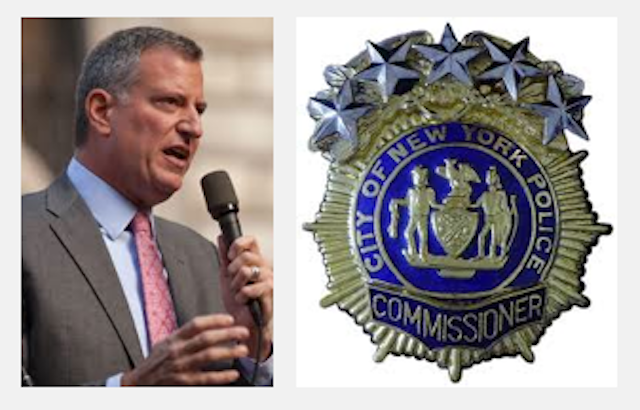 Early this week New York’s Patrolman Benevolent Association came out swinging against NY Mayor Bill DeBlasio. A petition being circulated by the group to its members states that any officer who signs this petition asks that Mayor DeBlasio not be allowed to attend their funeral if they are killed in the line of duty. This was a huge move on behalf of the 35,000 officers and the police union and it underscored the feeling that the NYPD was “thrown under the bus” by DeBlasio over his remarks after the Eric Garner chokehold death. PDA head Patrick Lynch said that he has never seen morale at a lower point than it is today after it became obvious that the mayor took sides against his own police department.

“It is very clear to me that the mayor has no idea of just how angry New York City police officers are at him for his lack of support and for laying decades of society’s problems undeservedly at their feet”, Lynch said. Just this past weekend, two officers were attacked and hospitalized for injuries while on duty. DeBlasio basically shrugged it off as an “alleged attack” even though the assault was caught on tape and it was clear what had gone down.

This unrest between the mayor and the police has been brewing for awhile. They feel that he had virtually tied their hands when it came to fighting crime when he took away their right to “stop and frisk” saying that it discriminated against minorities. To add insult to injury, he has aligned himself with Al Sharpton who has always been anti-police and works in every way he can to undermine them.

I lived in New York City off and on from the mid 1970’s until the 1990’s and I saw the best and the worst of life there. The city was basically a sewer in the 70’s with rampant crime, drugs, prostitution and economic disaster. Mayor David Dinkins was trying to control an out of control city and he couldn’t win the battle. When Rudy Giuliani took over in the 1990’s the turnaround began. He was tough on crime, had a solid police force behind him and took New York City out of the depths. I lived there, I saw it and it was a miraculous transformation.

Today, it looks as though all of Rudy Giuliani’s and even Bloomberg’s advances are being reversed. Just a week ago at the height of the Christmas season, protestors were clogging the streets, snarling traffic and making visitors from all over the world uncomfortable as they were shouted at and shoved aside on the streets of New York.

The police at this point don’t know what to do. Do they try to restore order and make arrests? Or do they just stand back and let chaos take over. If they try to do their jobs will they end up sacrificing their lives, pensions or careers? With a mayor like DeBlasio who is more in tune with the criminal than with the law, who could blame them for taking a hands off approach?

Stay tuned for Round 2.