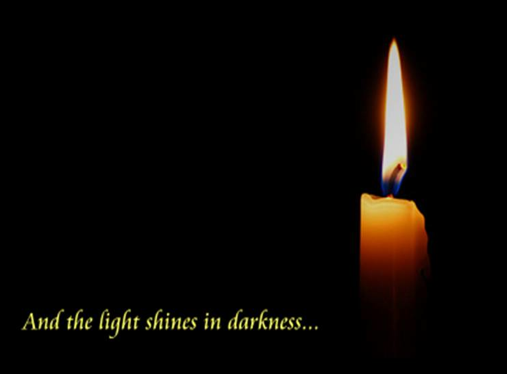 New York City is known for shining so brightly with the lights of Broadway, the ever changing nightly colors of the Empire State Building and of course Lady Liberty’s torch, showing the world the path to freedom.

It’s sometimes the smaller lights which shine the brightest; the light which not only shines throughout a neighborhood, but across the nation. It was that smaller light in Brooklyn recently, which shone brighter than Lady Liberty. The candlelight vigil held in honor of Officer Wenjian Liu and Officer Ragael Ramos filled the street with the message of light in the darkness.

The street corner, where these two heroes were assassinated, was filled with the simple tune of “This Little Light of Mine”.   Away from the photo opportunities and the political rhetoric, a community came together with a simple, childlike faith and attitude. This community responded to the darkness of hate and despair, with peace. It brought into the community what had temporarily been stolen. Light.

Our nation is going through a time of extreme darkness. Americans have allowed the ideas of self-seeking, misguided individuals to dim the light of truth. Our citizens have been systematically beaten down and strongly influenced to now believe there is no hope, except in the arms of the big government and loud protests. Yet, the government’s arms are not outstretched to receive individuals and bring them comfort and protests only stir the pot of disruption, dissension and chaos.

The words which flow from those with divisive tongues are snuffing out the light.

We are missing the light which the residents of Brooklyn’s Bedford-Stuyvesant neighborhood sang about at their vigil. The light they were sharing was Jesus Christ. His light is “what shines in the darkness, and the darkness can never extinguish it” (John 1:5 NIV). That is the light the residents, who were protected by Officers Liu and Ramos, were trying to spread.

What a difference there is when people respond in a civil, “Light” guided manner. That vigil didn’t call for additional killings. The Officer’s families weren’t crying out for the destruction of the neighborhood. If fact, Officer Ramos’ cousin called for unity in the city and forgiveness of the killer. The Ramos family “forgives [the killer] because God forgave us”, a cousin told reporters. What an incredible testimony to this family and what guides their life.

There is no denying something has gone wrong in society. It isn’t always so much a “them versus us” situation. In many occurrences it is a loss of direction.

High profile Community Organizers have seized these opportunities to air their grievances publicly, rather than do as some have suggested, and talk it out face to face. It is sometimes easier to grab the national attention and create chaos, than it is to do the hard work of sitting down quietly to resolve resentments and objections. When loud protests and news conferences are scheduled, the point of the objection is lost. Other questions are raised or violence ensues thus redirecting the focus of what needs to be discussed.   All of society should be made aware of injustices in our country so we can pray for peace among others as well as, help prevent it from occurring in our cities. The problems arise when the larger population only hears about the catalyst which created the uprising and they don’t have the background of why the community is now in turmoil.

As a nation, we need to listen to the residents of Bedford-Stuyvesant and support them in the efforts to meet as a community and resolve their differences. My community is different than theirs, but each has their own issues, which can only be understood by those who live there.

Those of us on the outside of Brooklyn, Staten Island, Ferguson and any other community should help increase the light for these residents, not add to the chaos.

Increasing the light begins by praying for our own communities to resolve differences, as we continue to pray for these other neighborhoods which are in the middle of incredible tragedies. Pray for resolution of cultural differences. Pray for parents to have strength and courage to teach their children respect for others, rather than disrespect and hate. Pray for those with high profile positions, whether elected or self-designated, to see the truth in society, rather than seeking payback for earlier injustices.

Pray that the light which was sung about in Brooklyn will become a beacon in our nation. The light of peace over conflict, joy over discontent and love over hate, will win over the darkness. All of us need to be the lampstand for the Light.

Don't Get Defensive This Christmas

Documentary “PATTERNS OF EVIDENCE: The Exodus”