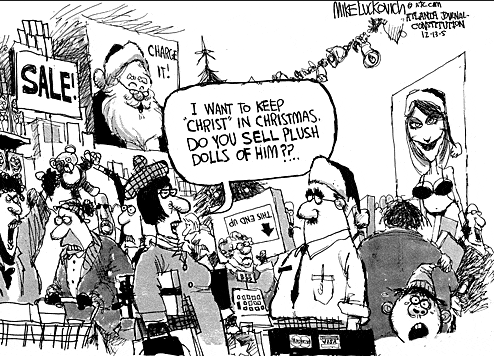 Every Thanksgiving, Leftists magically become champions of Family Values, of the importance of spending time at home with family rather than at work. The weeks preceding Thanksgiving see countless media stories bemoaning the sacrilege of businesses open on Thanksgiving Day. Unions organize protests at workplaces open on Thanksgiving, write finger-wagging articles and bash heartless corporations who “can afford to give employees this holiday to spend with their families.”

But Leftists’ concern for family values mysteriously vanishes weeks later at Christmas, when they no longer care if businesses force employees to work. So why are “family values” important on Thanksgiving but not Christmas? One prominent business operating on Christmas Day is Hollywood, which commonly uses the holiday to release important films. In the process, Hollywood profits billions of dollars from movie theaters that pay some of the lowest wages in the United States. Why are Liberals outraged at Walmart for holiday work days but not at Hollywood?

Every Christmas day, over 100,000 low-paid workers must leave their families and work in movie theaters to fatten the corporate bottom line of the Hollywood studios. In 2014, at least four major movies will be released on Christmas day. The film industry domestic gross sales this year already totals over $9 billion before these Christmas day blockbusters.

As it does with Walmart on Thanksgiving, why doesn’t leftist MoveOn.org tell Hollywood it “can afford to give its employees this holiday to spend with their families”? Why don’t Leftists demand Hollywood executives give one day off to all the low-paid theater employees who sell tickets and popcorn, clean bathroom toilets and sticky theater floors, so they can spend Christmas with their families at home? Why no outrage by the Left at Hollywood’s corporate greed and crass Christmas capitalism?

The Left’s schizophrenia toward these holidays exposes its bias. Liberals preach “family values” as a cynical, hypocritical farce, a sham concealing the Left’s true agenda to empower unions, that powerful compulsory engine of Democrat fundraising. Thus, at Thanksgiving these liberal power brokers use Alinskyite rabble-rousing tactics to intimidate businesses like Walmart who oppose forced unionization of employees. But at Christmas, Leftists maintain a sanctifying media silence to shield the powerful entertainment industry from the same “family values” scrutiny, notwithstanding the low pay and non-union status of the theater workers whose labor profits Hollywood fat cats.

Because Hollywood is a union town after all. And Jesus never joined the United Brotherhood of Carpenters.

Rapper ‘The Game’ Rants Against Police

A Good Samaritan Story to Warm the Heart for the Holidays