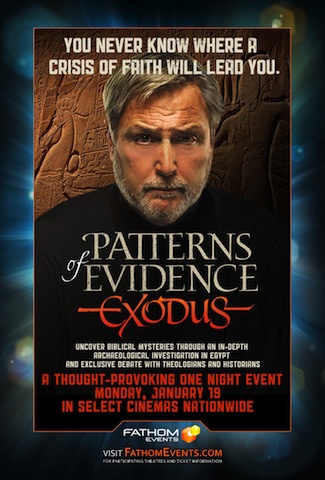 Get ready for a riveting and truthful documentary and mark your calendar for January 19. Pre-Show with Behind the Scenes’ insights starts at 6:30 p.m. (local time) with the film beginning at 7:00 p.m. at one of 650 select cinemas nationwide!

After the documentary, be sure to stay because the production and marketing team has assembled a panel of nationally prominent clergy and speakers to provide insight and commentary.

Biblical films are not new to Hollywood. Many wonderful pageants based on Scripture such as “The Ten Commandments” have been produced by such luminaries as Cecil B. DeMille with reasonable biblical accuracy.

Then there was Martin Scorcese’s, “The Last Temptation of Christ,” where the story line not only portrayed Jesus as being in conflict with his divinity, but had many other heresies as well, followed by a genre of biblical films written by revisionist historians that anyone with a casual exposure to the Bible would readily recognize them as biblically inaccurate.

Very recently, there was a firestorm over a new generation of fantasy “Bible” films: “Noah” and “Exodus: Gods and Kings.”

Joe Battaglia of Renaissance Communications, a longtime family friend, is part of the production and marketing team for the documentary: “PATTERNS OF EVIDENCE: The Exodus.” I had a chance to chat with him yesterday.

LS: Joe, tell me about the documentary you’re working on and what your role is.

Joe Battaglia: I am working with the producers of a memorable event that will be seen on the big screens in hundreds of theaters throughout America as Fathom Events presents an event titled, “PATTERNS OF EVIDENCE: The Exodus.” My role as a member of the production and marketing team is designing the national promotion and assembling a panel to include national prominent clergy and speakers, including Dennis Prager and Eric Metaxes. The panel will provide insight and commentary and will be moderated by journalist Gretchen Carlson, host of Fox News’ “The Real Story with Gretchen Carlson.”

LS: We see so many untruths coming out of Hollywood’s films which have been influenced by the Bible. How is “PATTERNS OF EVIDENCE” different?

JB: It’s different because it’s a documentary, not a film and it’s different because the Fathom Event will address the all-important questions of whether or not stories like the Exodus are based on truth or are they a collection of myths; is the Bible historically accurate, or are the stories on which major religions of Judaism and Christianity are based actually fictional? Is there any evidence at all that these stories actually occurred.

“PATTERNS OF EVIDENCE: The Exodus,” was 12 years in the making by my friend and documentary producer, Tim Mahoney. It is the most comprehensive examination of the Exodus story ever put on film.

LS: Your film is right on the heels of “Exodus: Gods and Kings.” What do you hope “PATTERNS OF EVIDENCE” will accomplish?

JB: With Ridley Scott’s “Exodus: Gods and Kings receiving mixed reviews, the Exodus story will be foremost on the minds of most Americans. This one night “PATTERNS OF EVIDENCE: The Exodus” event will help shape the national conversation on this highly important and controversial subject. It promises to be an exciting and intellectually rewarding forum!

GET YOUR TICKETS NOW for this special one night Fathom Event in select theaters nationwide.

TO SEE A FILM TRAILER AND LEARN MORE:

The Light Still Shines in Brooklyn

The Left Uses Another Tragedy to Take Your Guns!