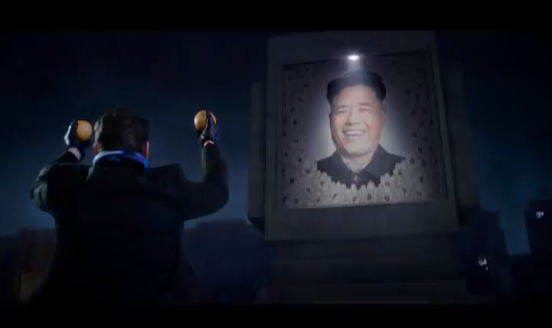 Since Kim Jung-un has decided that the American people cannot see the film, “The Interview”, and our president requires a personal phone call to protect our Constitution, I feel it appropriate that we, the American people, should “fill in the blanks” and finish the storyline ourselves. Since I couldn’t actually see the film, here is my review, based on preview clips and my own imagination/interpretation.  I invite patriots across the nation to add in or delete the storyline where they see fit.

Directed and starring Seth Rogan, The Interview is an American comedy about a television producer and the star of his sleazy tabloid show, “Skylark Tonight” who are invited by North Korean leader Kim Jung-un to interview him at his home in Pyongyang.

The CIA, who have been attacked by witless Democrats in a bias report, ask to come along to “take out” Kim Jung-un in celebration of his denouncement of North Korea. Upon arrival, a celebration ensues with Kim Jung-un, dressed as the statue of liberty and waving the American flag.  He sees the shameful ideology they had in the past and now wants to worship the American way.  Kim Jung-un presents the Americans with gifts such as tanks and puppies and begs for Sony not to give creative license to Al Sharpton and his likes for future filmmaking ventures. Kim Jung-un pleads with Americans to ignore the racist rants of Al Sharpton, Eric Holder, the White House, and all the other race baiters and profiteers and to remember we are all one. North Korea will now erect statues in dedication of George Washington, Abraham Lincoln and American Policemen. North Korean citizens are now encouraged to spank Kim Jung-un and his entourage in public and will create their own democracy.

Later, Kim Jung-un, now dressed as Uncle Sam, declares if Reid, Pelosi or any liberal elite enter his country he’ll throw them in the sea of Japan, feeling assured their bloated self image will keep them afloat. Hollywood’s A-list actors are invited to star in a North Korean re-make of “The Wizard of Oz” where they each will play the role of the Cowardly Lion.

In the end, the ominous “pen and phone” are blown up in a North Korean helicopter as Kim Jung-un narrowly escapes. Kim, now dressed as Katy Perry, washes out Jonathon Gruber’s mouth with soap and water and forces him to write one thousands times in public, “American people are not stupid!” The North Korean government surrenders to their people and wearing only the ISIS flag as a diaper, Kim Jung-un joins America in fighting for “Truth, Justice and the American Way”.

Until the film is released to the public to differ from this review, this stands as true as any other.

Movie Trailer of “The Interview”

An Open Letter from an Officer’s Daughter to Police Protestors