The media is completely missing the most important point of the Eric Garner story. A precious life was ended and the entire City of NY is in disarray because of overreach of government. The problem here is that there was a law against selling a single cigarette. Why? The law was passed because taxes would not be collected on that cigarette transaction. The police are therefore overburdened and over-empowered. They can’t possibly be operating on a “right v. wrong” mindset. There was nothing immoral about what Mr. Garner was doing; he was simply not complying with man’s law to control – or enslave – its citizens. 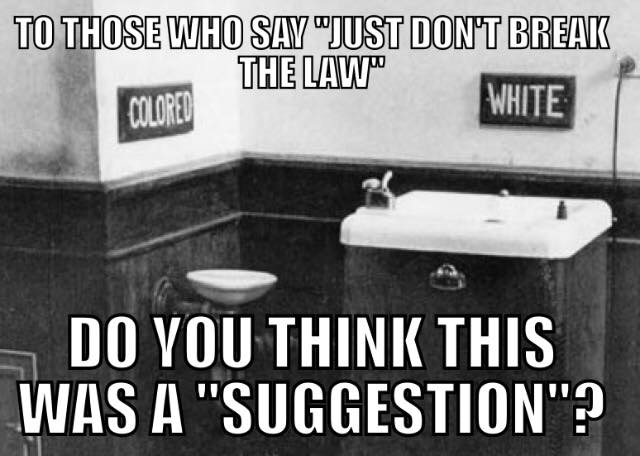 There are millions of laws that cannot possibly all be followed. Unless you think you completely understand all the laws on the books, you have no idea if you are following all of them or not. You think you know all the tax laws? Call the IRS three times and ask whoever answers the phone the same question–chances are you’ll get three different answers. On top of that, tomorrow the laws will change without your knowledge. Lawmakers and enforcers are out of control trying to control. God Almighty only needed 10 Commandments.

There is no excuse for this hysteria against our police officers. With the exception of a handful, they do intend to serve and protect. Their lives should not be in danger for that. Their task is impossible because the size and role of our government is completely running amok.

Human law is neither divine nor sacrosanct; to believe otherwise leads people to very slavish thinking. It also leads to this inane comment that I’ve heard a hundred times: “well, if you’re not doing anything wrong, you have nothing to fear from the government.” As if all law is legitimate. Some laws MUST be broken to advance freedom and liberty.

While “lawful,” was the picture attached to this post morally correct? Should the blacks just have submitted to it and said: “well,… as long as I’m just drinking out of the small fountain, I’m not going to have to fear punishment from the government!”

We’ve got to change our thinking on the role of government friends. Just because a government (a body of elected and appointed fallen, flawed men and women) passes a law, that doesn’t mean the law is correct nor does it mean it is divine and sacrosanct.

For example, right now it is “lawful” to steal from one and give to another – it’s called taxation,

Right now, it’s “lawful” to kill an innocent human being without due process – it’s called abortion.

Right now, it’s “lawful” to tell people what they can and cannot use their property for – it’s call zoning.

Right now, it’s “lawful” to seize peoples lands to hand over to business interests for development to increase a tax base – it’s called eminent domain.

The list can go on and on but you get the point, Not all laws are divine nor sacrosanct. Most need to be immediately challenged and ended.

Thank goodness MLK didn’t just submit and say: “as long as I’m not drinking from the white mans drinking fountain, I don’t have anything to fear!”