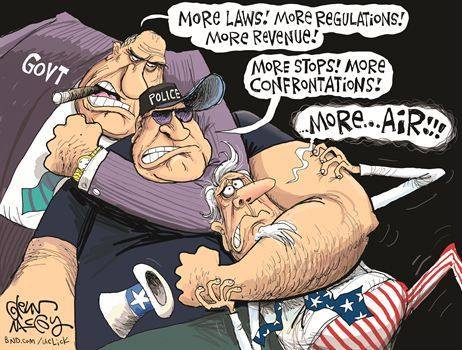 Life is precious. Eric Garner’s life ended because there is a law on the books in NY regarding taxation of cigarettes. Even his wife and his daughter have spoken out against racism claims in this event. They blame it on an over-zealous police officer. We should back that thought process up one more step to ridiculous legislation. Why were there five police officers there to stop the heinous crime of selling cigarettes for $1? Let’s see if Webster’s dictionary can help send a shiver down your spine: Govern = Control, and Mente = Mind.  (Govern + Mente)

Just last Friday I shook the hand of one of the police officers in my town. Their job is impossible. Most of the policemen in my community desire to serve and protect, but then there are so many laws that almost everyone is breaking a law at any given moment. Take just ObamaCare, for instance. Do you know what is in it? Did you know that the Resident just (illegally) changed the law again last week while you were watching Ferguson burn? Are you still in compliance? How can an individual possibly follow laws when you have no idea what they are. 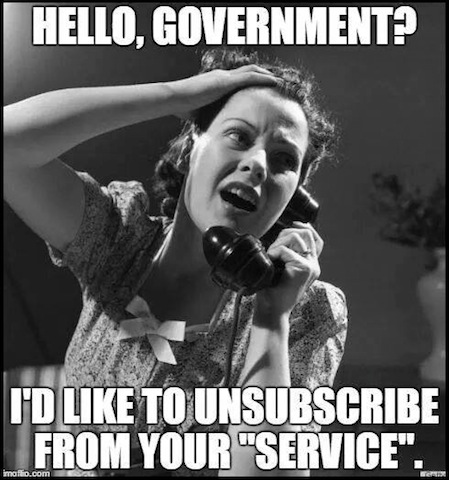 My dear friend, Mark Kreslins made some outstanding remarks on this topic regarding this article from Washington Post. I hope every legislator will take a look at this. I hope you will send this to your State Senator and Representative. Send it to your City Manager or City Councilman. Send it to your police chief. It will have to be the States that stop the bulldozer of Federal Government. Talk to the leaders who live in your neighborhood. Remember to talk to them the way you would like to be talked to.

Mark Kreslin’s article entitled Don’t Support Laws You Are Not Willing To Kill To Enforce really is the crux of the Garner case and what will be others that will come in the future unless we change our view of government.

When government wants to execute a policy related to taxation, use of private property or even liberty, it’s ultimate threat is that it will kill you to enforce it. This is what is lurking behind the Garner case and sadly, it is being cloaked by “use of force” discussions or arguments or Garners health issues, or his lack of obedience, etc.

It’s the government policy of taxing cigarettes and creating a black market that is the real issue here. Just as it is when people have their property seized when it comes to the EPA and wetlands. Or when businesses are forced to comply with regulations related to who they must serve. Government will use overwhelming force to reach compliance. Is that really what we believe the role of government is? If it is, then we have a population of sociopaths who like to act authoritarian and use government to accomplish their objectives. Count me out!

Always behind the scenes is some busybody writing a law or regulation that ultimately will be enforced and in some cases (fortunately few) results in the death of someone.

Garner’s death is not about racial profiling in my view (though I fully understand the argument), it’s about the way, way too powerful government and it’s reach into our lives and our pockets. There’s only a cigarette tax because a group of busybodies got together and decided to tax smoking into oblivion and saw the best way to accomplish that goal was by using government force, including physical restraint and arrest. Plus, in a parasitic fashion, governments also need money to survive and because they don’t produce anything to sell, they have to confiscate it via “legal theft” as Bastiat put it.

Is that really the type of government we want? Are you that committed to your ideals of a perfect society that you will lobby for government to physically restrain, arrest, confiscate from or kill your fellow man?

I pray this is what we learn from this, not whether too much force was used. If that’s all we see from this mans death, then we will have missed the larger issue at play here.

I grieve for this man and his family and I will NEVER accept that this had to happen. I didn’t happen simply because he refused to submit; it happened because there should never have been a stupid government tax. It’s the lawmakers and regulators that should be on trial here, not whether or not Mr. Garner should have complied.

Politics Then and Now