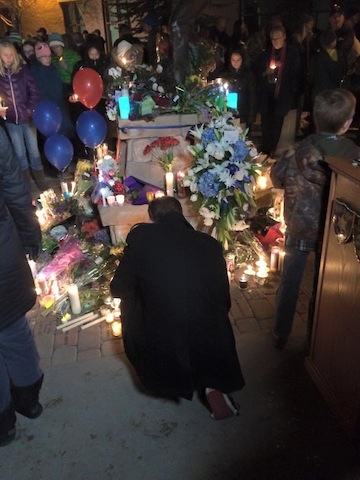 Flagstaff, Arizona. A small mountain town. My mountain town. Home of Northern Arizona University (my alma mater), Route 66 and quaint mom and pop shops. Known for its proximity to the Grand Canyon, annual snow fall (yes, it snows in Arizona), and dark sky restrictions. Flagstaff is the kind of mountain town you see on postcards and in snow globes. I had the privilege of calling Flag my home while I was in college. A part of me will forever remain there.

Recently, Flagstaff was thrown into the media in the last way I would have ever thought possible: by people targeting police officers. “Flagstaff, Arizona” was trending on Facebook, friends were posting news articles and updates of what was going on. My heart broke. Things like this don’t happen in the postcard or snow globe image of a mountain town, of a small, quaint and rural area. People are genuinely good and look out for one another. If arrests were made, they typically involved drunken college kids. Nothing out of the ordinary.

Two things come to my mind: 1) Was the suspect planning on shooting the officer from the get go? Was the altercation with his girlfriend a coverup to lure a cop in? 2) It’s beyond cowardly to shoot someone who is down and can’t reach for their weapon.

I have a strong feeling the suspect shot Officer Stewart because of the tension between cops and civilians nationwide. Even though the suspect and the officer were both white, I believe the suspect felt “white guilt” and took that out on the officer. Even though I love Flagstaff, the people are fairly Liberal. Some of the whites feel guilty for being white and privileged. Taking their guilt out on an officer like Officer Stewart is their way of “helping the cause,” whatever the cause maybe.

A candle light vigil was held for Officer Stewart. A close friend of mine attended the vigil and said it was a humbling experience, with around 1,000 people in attendance. Attached is a picture of community members paying their respects.

As we start the new year, I ask each and every one of us to say a prayer for our law enforcement, fire departments and military personnel who continually fight for our safety. Our PolitiChicks Gratitude Campaign is one way you can show your thanks; if you have yet to participate, please, please do something, big or small, to let these men and women know you’re on their side and you appreciate what they do for our community.  All it takes is a phone call, or bringing your local precinct some (sealed) snacks to enjoy as a way to say ‘thank you’ for all you do.

May you rest in peace, Officer Stewart. You made the ultimate sacrifice. Without people like you, Flagstaff wouldn’t have been a home I love and miss. Thank you for your service.

Judge For Yourself: Are These the Most Racist Comments by a U.S. First Lady?