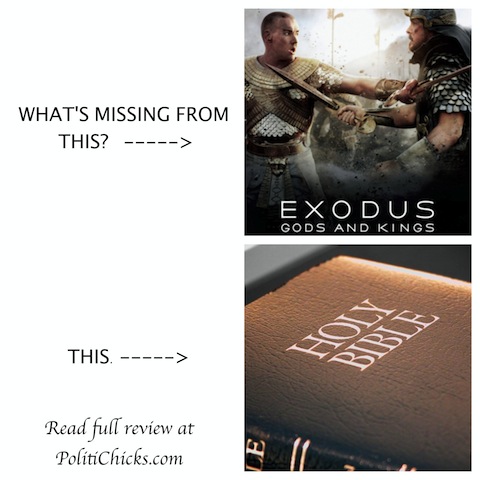 Directed by Ridley Scott and starring Christian Bale (Moses) and Joel Edgerton (Ramses), Exodus: Gods and Kings is a sort of, kind of, “biblical” film if you want to believe that Moses was inspired by a blow to the head and had a vision of God as a bratty prepubescent boy. Although this film had very little to do with the written word, I was still going to cut it some slack due to the special effects and performance of Christian Bale (Moses). However, the final scene of Moses himself chipping away at the Ten Commandment tablets while being almost pinky sworn by the bratty boy (God?) at the end of this film changed my mind.

Somehow Edward G. Robinson, in the DeMille version, wearing a robe and taunting the crowd with the golden calf, seemed far more accurate. Exodus seemed to be a Science Channel version where the viewer would easily walk away with, “Oh, Moses was insane and all the events of the Exodus were just coincidence and quirks of nature”. Heaven forbid the Hollywood of today would tell the biblical version. But I must admit some of the special effects were well done (especially in 3D) and Joel Edgerton (Ramses) delivers a fine performance as well (therefore 2 stars).

One of the women I spoke to after the film, Tanya, was a Sunday school teacher. As we exited, she introduced me to her husband, Lou, patiently waiting outside. She explained to her husband how disappointed she was with this version and told me every year she and her family watch The Ten Commandments and will continue to do so. Her husband just smiled knowingly and said to her, “I told you so.” So for those who expect to see Exodus: Gods and Kings as a telling of scripture, it is not. If you still plan to see it, in the wise words of Lou: “I told you so.”

Retailers Paving the Way for Misfortune