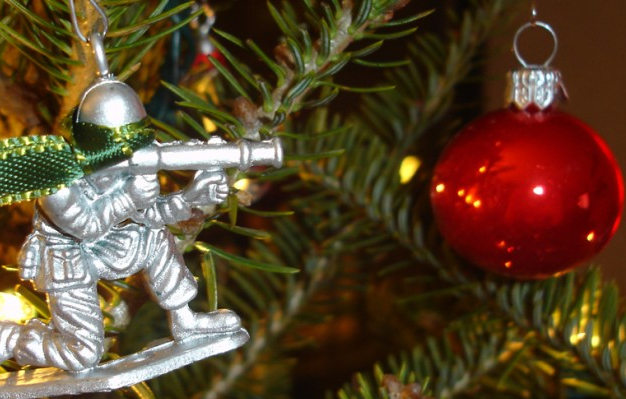 Countless traditions have been created around the Christmas holiday but ultimately, presents, decorations, food and Santa aside, Christmas is a time to celebrate the birth of Jesus Christ.

It’s pretty simple, and to properly celebrate our Lord, it doesn’t require anything other than us and what’s in our hearts. Yet every year there is a fight, particularly on social media, between my fellow Christians and a dubious character that I refer to as the invisible atheist. This is a guy that many of us are on the lookout for.

We believe he seeks to steal Christmas from us.

Now I am fully aware that there are actual people and groups who fit this exact description. The Freedom From Religion Foundation is a group that actively seeks to diminish or outright remove any traces of Christmas from the public square. But we need to be careful not to become defensive towards or even angry with a person that we do not know.

There is a difference between fighting to freely practice your religion and baselessly asserting that X person is trying to infringe on your rights. There is a time and a place to fight and there are real battles worth engaging.

But please, fellow Christians, don’t engage in the blanket demand to “keep Christ in Christmas” just for the sake of taking a stand.

Believers need to remember that no matter what actions atheists take, Christmas can not be ‘stolen’ from believers. Christmas is not about a nativity scene in front of a fire house. It’s not about a party at our children’s school. It’s about us as individuals and families celebrating our Lord’s birth. In order to do that, it requires nothing but us and our hearts.

While we often point out how bizarre it is that atheists get so worked up over something they don’t even believe is real, we may be failing to realize that we are focusing more on a personal fear than a reality.

I want to respectfully submit to my fellow Christians that our focus is wrong.

Christ himself told us that the world would hate us because of Him. He also said that if they persecuted Him, they would also persecute us. He instructed us on how to respond: with love. We as Christians should be living as an example to non-Christians by showing them His love; that’s an offensive, rather than defensive strategy and it’s much more effective!

We should never lay down when real issues arise, but we also need to make sure we aren’t spewing rhetoric just for the sake of taking a stand. To do so is counterproductive.

Remember: Christ knows where we stand and it’s more important that we focus on His priorities, not so much our own.

New Jersey PolitiChick Alyssa Lafage is a conservative activist from New Jersey with a fiery passion for individual liberty and traditional American values. As the creator and editor of ConvictionsofFaith.com, Alyssa speaks unapologetically on everything from national and local political news and cultural issues to philosophy, history and faith. Realizing that the long record of failure in Washington has been at the hands of both political parties, Alyssa focuses on calling out the statists and promoting smart conservative solutions. As a native of the very blue state of New Jersey, Alyssa is no stranger to the politician's insatiable love of everything big government and their snake oil salesmen tactics which have hypnotized her generation into accepting institutionalized ideological failures. She has made it her personal mission to expose them. Her efforts are rooted not only in opposition to the misguided ideology that her fellow youth have been predisposed to accept, but in support of the truths of history, human experience and common sense. Through her various writings as well as video blogs, and social media coverage of political and grassroots events, Alyssa makes the case for constitutionally limited government and freedom. In addition to writing for ConvictionsofFaith.com, Alyssa's work is regularly featured on NewsNinja2012.com. Alyssa is one the #NinjaChicks contributing as part of #TeamNinja on the Wayne Dupree Radio Show weekday nights via webcast. Alyssa is an admin and contributor to various conservative and charity initiatives with active followings on social media platforms, mostly notably The Founders Intent, MercuryOne New Jersey and Patriot Quotes.

This Jew says, "Step Away From My Christmas Tree!"

The Light Still Shines in Brooklyn