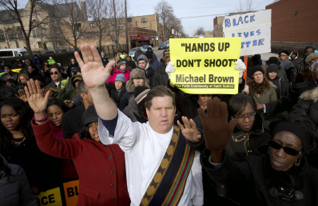 Did you bury a teenage girl alive after shooting her? Are you on death row after a string of crimes too gruesome to describe? Or you just a member of Al Qaeda dedicated to destroying America?

If so progressives will fight for you. Just dial 1-800-IAM-VICTIM and the left waiting to take your call will insist on your presumption of innocence. Its activists, reporters and lawyers will exploit every pretext to get you off the hook and they will call that justice.

The judicial process, they will say, matters more than public safety, public outrage or the victims.

When the crime wave set loose by their own activism flooded the country they clung to Blackstone’s formulation of “It is better that ten guilty persons escape than that one innocent suffer.” As murders, rapes and robberies rose, the value of that formulation went up from ten to ten thousand.

But it had to be the right ten thousand.

Leftist lynch mobs rioting in Ferguson, marching through Manhattan and screaming in Oakland assert that the presumption of innocence doesn’t apply to police officers or white Hispanics. Their poses of victimization with their cries of “Black lives matter” and “I can’t breathe” disguise what they really are.

They were protesting before the case moved forward. They have continued protesting after the verdict was in. That’s not a call for justice. It’s a lynch mob that knows what the verdict should be and seeks to intimidate the authorities into giving it to them by taking the law into their own hands.

Rolling Stone’s rape story was cooked out of the same ingredients; a presumption of guilt and a lynch mob demanding its own brand of justice. The facts never mattered.

The assistant managing editor at the University of Virginia’s student paper admitted that when she argued, “To let fact checking define the narrative would be a huge mistake.”

It was never about the facts. It was about the narrative. And the narrative was not only the guilt of a few men, but the way that their guilt stood in for the guilt of all men or all white people. The factual question of whether Officer Darren Wilson or a few UVA students committed a crime was a technicality.

Fact checking just obstructs the narrative that all white people or all men are guilty.

The old lynch mobs presumed that a black man was guilty on account of his race. So do the new lynch mobs. 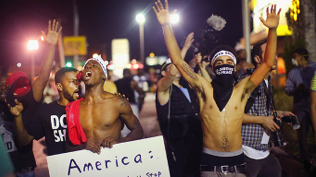 Wilson’s crime wasn’t shooting Michael Brown. It was shooting him while being white. If he had been black, we wouldn’t be talking about it now. If the black sergeant supervising the takedown of Eric Garner had been the one to restrain him, there would be no protesters shouting “I can’t breathe”.

Subtract the race of the perpetrator and the case wouldn’t exist. That’s what makes the case racist.

A lynch mob brought into existence by the race of the man they want lynched is a racist lynch mob.

Classic lynch mobs treated the actions of one black rapist as a justification for repressing all black people. The leftist lynch mobs at Ferguson and the University of Virginia used the accusation of an individual crime to call for the repression of entire groups, to attack all white people and all men.

Even if these crimes had turned out to be substantiated, indicting hundreds of millions of people for the actions of a few is the narrative of a hate group. And that’s what progressives have shown that they are; a respectable establishment hate group that demonizes millions of people and leads lynch mobs.

That’s a direct quote from its co-founder.

Roger Nash Baldwin wrote, “If I aid the reactionaries to get free speech now and then, if I go outside the class struggle to fight against censorship, it is only because those liberties help to create a more hospitable atmosphere for working class liberties… When that power of the working class is once achieved, as it has been only in the Soviet Union, I am for maintaining it by any means whatever.”

When Baldwin wrote these words, he was speaking of a Soviet Union led by Stalin which was maintaining its dictatorship of the proletariat through a secret police, torture and mass murder.

The co-founder of the ACLU was not only endorsing Stalin’s crimes, but he was also looking forward to an American Stalin rounding up enemies of the state and shooting them with the support of the ACLU.

The presumption of innocence is an idea that leftists only believe in when they aren’t in power.

When the left isn’t in power, then it may protect civil liberties to protect itself. When one of its own radicals is sitting in the White House, then it leads lynch mobs through the streets. The protests aren’t acts of weakness by victims, but signs of strength by oppressors.

The left is rejecting the democratic results of the midterm elections and turning to street violence. Their confidence is derived from the support of the establishment from the White House to the media. Never have lynch mobs received such universal acclaim from all the powers of the United States of America.

The progressive lynch mobs in Ferguson and at the University of Virginia contend that some crimes are too hurtful to a particular population to be protected by the presumption of innocence. Some suspects should be presumed guilty because of the combination of their race and gender with a national crisis. 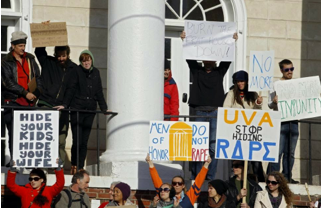 After fighting for Al Qaeda terrorists at Gitmo, the left hypocritically decided that the presumption of innocence should apply to Muslim terrorists but not to police officers. The civil libertarians of the left went from championing the rights of criminals over those of victims to embracing the conservative position of victim rights… as long these rights are reserved for only the right sorts of victims.

The activists of the left must be forced to admit whether they are for or against the presumption of innocence. If they want to dispense with the presumption of innocence when it comes to enemies of the people like police officers and fraternity members, it will also go away for Islamic terrorists and violent thugs. Not to mention Weather Underground terrorists teaching at prestigious progressive colleges.

We cannot have a presumption of innocence for some people and not others. The left is not entitled to create two justice systems for two types of people. One group will be lynched with a formality of a trial manipulated to produce a verdict that not only damns one defendant, but also his entire race or gender. The other will receive every possible defense no matter how obvious his guilt may be.

America is a nation of laws, not of racist lynch mobs. Its trials are based on facts, not on narratives. The presumption of innocence matters more than the narrative and the social justice hashtag. Without it all we have left are racist lynch mobs with smartphones marching through Manhattan.