There was a time when fat was in and thin was out. Obesity was the privilege of wealth and being thin meant being poor. In simpler societies, before slumming became a romantic pose, there was nothing attractive about not having enough to eat.

To be fat was to be part of the leisure class. Thin meant you were on the road to the poorhouse or to consumption, which meant your body was being consumed, not that you were the one doing the consuming. 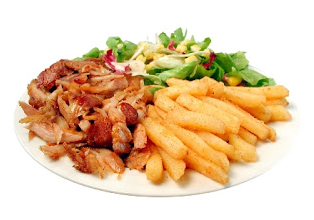 Then agriculture was revolutionized and the values flipped. No one in the West was starving to death and the poorest man could still grow fat. By the time the social programs kicked in, weight no longer meant leisure.

With packaged foods widely available and jobs shifting from the factory to the desk, it was entirely possible to work hard and get fat.

On the other side of the aisle, exercise meant leisure time. The standard was set by movie stars who struggled to meet unrealistic standards because they had the time and disposable income to do it.

Fat no longer meant upper class gentry. Instead it meant lower class peasant. As with art, the widespread availability turned minimalism, and eventually the worthless and overpriced, into class signifiers. Conspicuous consumption of that which was widely available was lower class.

The overflowing table made way for micro portions and exotic but barely edible foods. Thin was in on the plate and the waistline.
In many Third World countries where feudalism never ended, the values never flipped. Instead of anorexia, teenage girls suffer from being force fed to make them more marriageable. The wealthy are fat and the feasts at the top never end.

In the West, weight stands in for class, at a time when explicit classism has become politically incorrect. When Europeans sneer at how fat Americans are, and American coastal elites sneer at the rest of the country for being fat, it’s a class putdown.

And no one traffics in class putdowns like the left.

Liberalism has become an engine of class repression, with the super-rich pushing down the rich and the rich liberal undermining the middle class. Its regulatory regime limits social mobility and locks in class privileges even while spewing rhetoric about these and income inequality.

Obesity is a classic moral crusade whose real purpose is to inflate the sense of moral superiority of a particular elite. With the moral codes of sex and drugs having been dismantled by that same elite, obesity is one of the few remaining class signifiers, aside from cigarettes, that it’s safe to hold a moral crusade about.

The War on Fat echoes the same old obsessions of Prohibitionism, a paranoid concern about the inability of the lower classes to care for themselves that verges on bigotry, an imaginary crisis blown out of all proportion in order to justify abuses of power and the self-congratulatory superiority lurking behind the curtain.

Their obesity concern trolling is a combination of classism and nanny statism that brings to mind the days when their ideological forebears thought that the way to deal with the poor was to sterilize those who seemed less capable than the rest to improve the breed. The breed being culled while the elites try to teach their less evolved cousins to survive by eating their arugula.

Finding moral failings in a manufactured underclass justifies endless abuses of power by demonstrating the inferiority and unfitness of those below. Obesity fits into that same template.

The solutions never work. Michelle Obama’s botched school lunch program and ObamaCare lawsuits over fitness rewards once again show that the technocratic nanny state can never achieve the goals of the moral crusade. But slimming down isn’t really the goal. Bloomberg’s soda ban wasn’t a serious solution. It was an expression of disdain and most of those on the receiving end understood that.

Barack and Michelle Obama lecture on food while gorging themselves at banquets. The lecture is the point. Cutting calories isn’t. It’s easier to oppress those who are manifestly inferior. Every elite needs these hypocritical justifications of their own superiority. The nanny state is not an act of concern.

It’s an act of contempt. 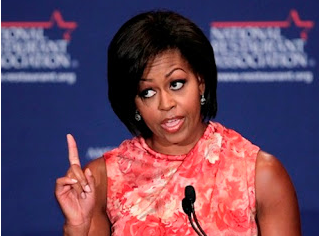 The nanny state is built on a technocratic confidence in the ability to create one size fits all solutions, overlaying that on a map of the current medical wisdom leads to the creation of single standards, which often have less to do with health than they do with the status symbols of the leisure class. 19th century popularized medicine created so many of these fads that some of them are still around today. The 20th century created even more of them. And the 21st century is only getting started.

Death though is not only inevitable, but it cannot be dodged with a one size fits all standard. Fitness guru Jim Fixx who helped kickstart the running craze died in his early fifties of a heart attack. Fixx had quit smoking and lost weight, and still died at an early age. Jackie Gleason who spent his life looking like a walking health attack, smoking and drinking, outlived him by nearly twenty years.

Medicine is individual and the collectivization of medicine is a technocratic solution that leads to broad stroke solutions, like adding calories to menus and other rats in a maze tactics designed to modify human behavior on a national level. The targeting of fast food restaurants, public school meals and food stamps reeks of the same elitist arrogance that drives the nanny state.

The politicization of food by the elites of the left always comes down to class, no matter how it may be disguised in liberal colors. From exotic to locally grown, the trajectory of food politics follows the upselling of food prices The only difference is that the dominance of the left has wrapped the added cost with no added value in their own politics. The more affordable food becomes, the more the left finds ways to add cost to food, without adding value.

But the politicization of food goes beyond the fair trade and locally grown fetishes of the politically correct elites, the more politics ends up on your plate, the more the elites are driven to involve everyone else in their food fights. What begins as a way of raising prices while diminishing value to assert wealth and privilege becomes imposed on everyone in the name of their political morality.

Once everyone else is paying more and getting less, then the classist left demands new ways to set its superior moral eating habits apart. Instead of everyone ending up with more food, everyone ends up with less.

Lefty culture practices conspicuous consumption, but the consumption has to be disguised with conspicuous political pieties. The food may cost twice as much, but it’s locally grown on a farm run by handicapped union workers who visit Cuba to receive free health care or by the indigenous peoples of Tuba-Tuba with the proceeds going to a complete sonic library of their chants and ceremonies. It’s a meaningfully meaningless hairshirt that disguises the consumption underneath.

Conspicuous consumption is now for the poor while conspicuous political consumption is for liberal elites. Al Gore may live in a mansion but he still has the carbon footprint of a mouse. The problem is the truck driver whose vehicular emissions are killing the planet. Whole Foods is just fine, but we need to do something about White Castle.

In a moment of horrifying tone deafness that makes Marie Antoinette seem enlightened, the left is cheering that fewer Americans are eating meat, without seeming to understand that it’s because fewer Americans are able to afford it because of the left’s economic policies.

What the left’s food police can’t accomplish with nudges and shaming, they can finish off with policies and regulations that raise the price of food or make it too difficult to sell. When the left fails to sell the public on conspicuous political consumption as a status symbol, it brings in the heavy bureaucratic artillery. 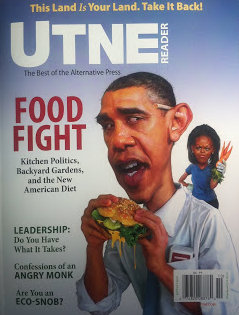 It isn’t unusual for elites to use the legal system to enforce their own values on the general public, though it was the kind of thing that the universal franchise was supposed to put a leash on, but there is something grim about their growing preoccupation with the habits and mortality of the population. It’s the kind of concern that has a habit of ending in eugenics and the more medicine is universalized, the easier it is to start cutting off access to medical treatment for those who haven’t been nudged far enough in the right direction.

Social medicine politicizes food consumption and a globalized economy politicizes food production. And the politicized American plate has less on it and at a higher price. While the left obsessively pursues its mission of destroying fast food in the name of lowering socialized medicine costs, they are taking affordable and filling food off the shelves, as they have done with countless other products that they have targeted.

By the time the left was done with Russia, it had gone from a wheat producer to a wheat importer and many basic food staples were hard to come by even in a country filled with collective farms. Finding modern day examples of that isn’t hard. We only have to look as far south as Venezuela to see empty store shelves under the weight of government food policies.

But one day that may be the local grocery store if the left gets its way.

Be sure to follow Daniel Greenfield’s daily blog, Sultan Knish.