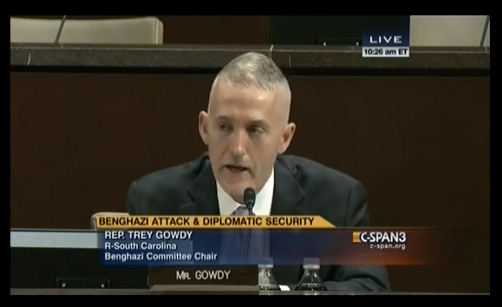 In an opening statement before the Benghazi Select Committee Hearing, chairman Trey Gowdy stated that, “It’s one thing to have it wrong initially and eventually get it right. It is another thing to have it right initially and then edit it and change it so that it is wrong.” His remarks were in response to the final position of the Obama administration on what occurred in Benghazi on September 11, 2012.

Mr. Gowdy recalled the timeline of events as they were reported the morning of the attack. He repeated the names of the four fallen Americans and he repeated his resolve to find answers. In response to those from both the Democrat and Republican Party, who say it is time to move on, Chairman Gowdy shared the following comment.

“We should not move on until there is a complete understanding of what request for additional security were denied, by whom they were denied, and why an Ambassador entrusted to represent us in a dangerous land…wasn’t trusted to know what security he needed to do his job.”

Congressman Gowdy then questioned again how the story about Benghazi had changed so drastically from the initial story put out in the days and weeks immediately following the attack. Gowdy pointed out that words like “terrorism” and “attack” were changed. He then noted that these same words now appear in the governments charges against the sole defendant facing charges for the Benghazi attack.

“The facts haven’t changed, the evidence hasn’t changed but the way our government characterizes Benghazi has changed a lot.”

Mr. Gowdy continued with his comments and explained his determination to find out exactly what happened and why. He pledged to continue having hearings until every question was answered and that this would be done to honor those who have given their last full measure of devotion. He concluded his statements with this statement. “This committee will be the last best hope for answering the questions surrounding the attacks of Benghazi.”