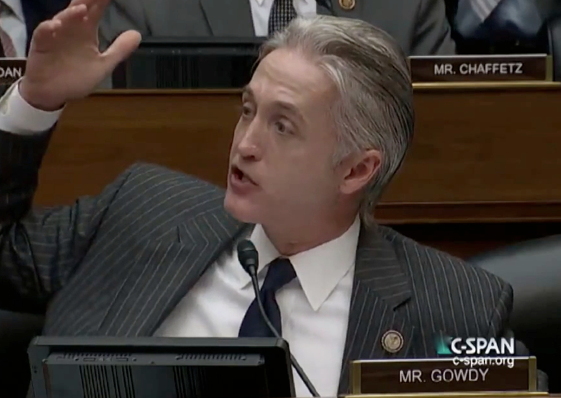 While the Benghazi Select Committee investigations are going on, a recent House Intelligence report released has been called everything from “crap” to being full of “inaccuracies” by some of the witnesses who were on the ground in Benghazi, Libya the night of the attack.

As with the many hearings and investigations over the past two years, the latest report leaves us with more questions than answers not only with the committee findings, but of some of those in charge of the investigations.

I’m not the only person who’s had flashbacks of the 9/11 Commission report. If anyone remembers, the Deputy Attorney General for the Clinton Administration was Jamie Gorelick. It was Gorelick who created the “wall of separation” between intelligence agencies and law enforcement agencies. It was Gorelick’s wall which led to serious failures and prevented counterterrorism agents and federal prosecutors from communicating with each another prior to September 11, 2001, yet she was one of the Commission chairs which investigated, questioned witnesses and made recommendations on the report.

Fast forward to the Accountability Review Board which investigated Hillary Clinton’s State Department’s accounting of events leading up to, during and after the Sept. 11, 2012 attack in Benghazi, Libya. Clinton herself had picked the head chair of the ARB Thomas Pickering who is a longtime friend of the Clintons, and also had served as Undersecretary of State under the Clinton administration. Pickering has been a chair member of the International Crisis Group (ICG) which includes others associated with the Clintons, Islamic and anti-Israeli groups and organizations. The ARB found that the Islamic attack on Americans had “Systemic failures and leadership and management deficiencies at senior levels…” but Clinton herself was never held accountable.

Forward again to the recent House Report, which was headed by Mike Rogers R-Mich. who was also Chairman of the House Intelligence Committee and a leader on national security policies.

According to a recent article in the Weekly Standard, back in November 2013, John Boehner met with three CIA witnesses at the office of Rep. Devin Nunes from California. Mike Rogers wasn’t in attendance, he had not been invited. According to the article Rogers was frustrated with “conspiracy theories” and reluctant to commit time and money to any further investigations, as “Whatever failures there had been in Benghazi, he explained, they had little to do with the intelligence community, and his intelligence committee would therefore have little to do with investigating them.”

This was only months before the news broke about e mails showing that talking points were changed and that the Obama administration including Obama, Susan Rice and Hillary Clinton knowingly lied about the cause of the attack, blaming instead the video.

This brings us back to the House Intelligence Committee report. The Washington Times reported that the committee found no failures in intelligence in connection with the attacks, and shockingly in light of evidence that any misinformation released after the attack was accidentally incorrect — not a deliberate attempt to mislead people.

Senator Lindsey Graham said the report is full of crap, and added, “I’m saying the House Intelligence Committee is doing a lousy job policing their own…”

How, after hard and well circulated evidence that the administration lied for weeks about the attack, and that various members such as Hillary Clinton, and deputy CIA Director Mike Morrell deliberately lied to committee members can this report make such outrageous claims?

Hillary Clinton lied to Senator Rand Paul when he asked if weapons were being shipped from Libya to Turkey to help arm Syrian “rebels” fighting against the Assad regime. She claimed to know nothing. “To Turkey? I will have to take that question for the record. Nobody’s ever raised that with me… You’ll have to direct that question to the agency that ran the annex… I do not know.”   According to a New York Times report, it described Clinton as “one of the driving forces advocating for arming the Syrian rebels via Turkish and Arab cut outs.”

In an interview with Greta Van Sustern Hillary Clinton claimed she was who wanted to help the Syrian rebels when no-one else wanted to and to topple Assad just as they had Gaddafi.

As for the email talking points, everyone in the Obama administration knew who and how the points were changed, yet Mike Morrell in sworn testimony said that except for changing one word, the White House had no role in changing the talking points.

It’s been reported that the Administration was aware that night that what was happening was an attack. CIA Director at the time, Leon Panetta was one who initially briefed Obama that night early during the Benghazi attack. Gen. Carter Ham broke the news about the unfolding situation in Benghazi to then-Defense Secretary Leon Panetta and Gen. Martin Dempsey the head of AFRICOM, the chairman of the Joint Chiefs of Staff. Transcripts show that he learned about the assault on the consulate compound within 15 minutes of its commencement, at 9:42 p.m. Libya time, through a call he received from the AFRICOM Command Center. Gen. Ham reported that this was a terrorist attack, not a demonstration.

We know that there have been lies and deliberate attempts to cover up some of what happened that night. This explains why John Boehner met with Nunes and others without Rogers’ input, but what does it explain about Mike Rogers’?

Since Rogers has access to intelligence, he must have known facts which had not yet been made public at the time. Why would he try and brush Benghazi under the rug?

It’s well known that Ambassador Chris Stevens met with Rogers and the Intelligence Committee prior to the attacks. It’s unusual that an Ambassador would meet with the House Intel Committee, yet nothing has been said publically about the meeting, whether he requested or was requested to appear.

Not much information is available about Aegis’s work in Libya but this isn’t the first time that Rogers has been accused of a conflict of interest in relation to his wife. It was reported last year that the Cyber Intelligence Sharing and Protection Act (CISPA), would benefit a private security corporation like Aegis from a law that allows for further interaction between the state and private enterprises. Rogers was in favor of the Act.

One more serious question involves Mike Rogers and Hillary Clinton and Beacon Global Strategies (BGS). BGS is a consultants group of Washington insiders from government. According to the web site, BGS is a strategic advisory firm specializing in International Policy, Defense, Cyber, Intelligence, and Homeland Security.

BGS leadership includes plenty of Benghazi notables such as former Deputy Director of CIA Mike Morrell, Andrew Shapiro, Adm. James Stavridis (Ret.) who was Obama’s replacement in Benghazi for AFRICOM Commander General Carter Ham, and Jeremy Bash. A notable republican also enjoys a leadership role, which he took during the time when the Benghazi Select Committee and investigations began to heat up. Michael Allen who served as Majority Staff Director of the House Permanent Select Committee on Intelligence (HPSCI), under Chairman Mike Rogers from 2011-2013.

Rogers’ attitude during the investigation and towards the whole Benghazi investigations for lack of a better word stinks and is highly suspicious. Career insiders claim they are after facts in a bipartisan way, and want to separate truth from conspiracies yet none of what they do is trustworthy and everything covers for their political crony friends.

There is also the matter of Operation Zero Footprint, and it’s highly likely that Rogers knew what was going on for a year before the attacks. If that’s the case, then Rogers and others involved have much to answer for, not only for the families of 4 dead Americans, but millions of displaced and murdered Syrians and Iraqis.

If anyone on Capitol Hill is interested in the truth for the families of four dead Americans and witnesses who deserve it, perhaps the Chair of the Select Committee Rep. Trey Gowdy will find a way to investigate Mike Rogers?

The Garner Case: Don’t Support Laws You Are Not Willing To Kill To Enforce‏