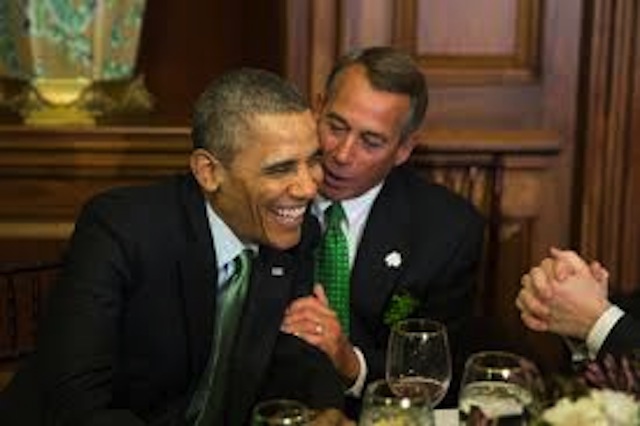 By now we all know that on December 11 the House passed the $1.1 trillion CRomnibus bill led by Speaker John Boehner and President Barack Obama.

In a December 4 Facebook post, the Speaker had this to say:  “The president thumbed his nose at the American people with his actions on immigration, and the House made clear today that we are rejecting his unilateral actions. The Senate should take this bill up and pass it.”

Boehner is referring to a bill condemning funding amnesty, yet the CRomnibus bill includes funding amnesty along with keeping the government in operation through September of 2015 and a continuing resolution to give Congress time to address funding for the Department of Homeland Security.

Earlier in the day, there were enough Republicans voting to kill the bill, but two Republicans switched their votes which enabled the bill to pass.

Kerry Bentivolio (R-MI) and Marlin Stutzman (R-IN) switched their votes from nays to yeas on the rule, allowing the House to take up the cromnibus bill after a 214-212 (procedural) vote. The presiding officer of the House had kept that vote open past the time allotted for the vote to twist arms of those two and more, and once they broke enough members to pass the rule they passed the bill.

But almost immediately, Stutzman says he was lied to in order to convince him to switch his vote. Roll Call published Stutzman’s press release:

“Earlier today, I supported the Rule because I was informed by Leadership that the CRomnibus was dead and a short term CR would take its place,” Stutzman said in a news release. “I was very surprised and even more disappointed to see the CRomnibus back on the floor. The American people deserve better.”

It appears the bill would not have passed if Stuzman and Bentivolio had not switched their votes.

With the delay in suspending the vote 15 minutes longer than is allowed by House rules, there must have been some major burning of phone lines and closed doors meetings by the White House and other officials to get it passed.

Breitbart sums up the madness for the day:

Then, after signs the bill would fail as Democrats resisted Obama’s and House Democratic Whip Steny Hoyer’s efforts to get them to support the measure—with Waters telling Democrats to not let Obama “intimidate” them—Boehner worked up a plan B, which was a clean Continuing Resolution that would have funded all of government at current levels through Feb. 27 when the new GOP controlled Senate and emboldened House GOP majority takes over. Boehner worked that plan B into an effort to “roll the dice” and bring the cromnibus bill to the floor for a vote in an attempt to call conservatives’ and liberals’ bluffs. If the cromnibus passed, that’d be what they move forward with. If it didn’t, they’d turn immediately to plan B.

When the cromnibus finally came up for the vote shortly after 9 p.m., Obama’s efforts clearly paid off. Obama’s lobbying of Hill Democrats secured 57 Democratic yea votes for Boehner’s omnibus, more than enough to close the gap of 67 Republican nays.

A whopping 139 Democrats voted against the bill, despite Obama’s support, and 162 Republicans voted for the measure.

The Democrats who worked and voted against it, including Minority Leader, Nancy Pelosi, were against a policy rider which, they said, would gut the financial regulations borne out of the Dodd-Frank bill passed in 2009, a rider offered by Republicans.

So is it all bad? Herman Cain doesn’t think so. He says, “Sometimes the smartest strategy isn’t the one that feels the best, and this is one of those times.”

By the time Obama announced his executive amnesty action, we were only weeks away from the most recent continuing resolution running out, which meant we were staring at yet another government shutdown. Having just won new majorities in both the House and Senate, Republicans were finally in a position to put an end to the perpetual cycle of continuing resolutions and get back to doing real budgets.

That would start with passing the closest thing to a real budget that we’ve had since 2009, which meant a spending bill that would fund the government through the end of the current fiscal year in September. Then the new Congress could go to work on a FY 2016 budget that would be more reflective of Republican spending priorities.

When Obama dropped the amnesty bomb, the only real weapon available to congressional Republicans was to strip the Department of Homeland Security of the funding necessary to implement it. But that’s hard to do when all the government’s spending authority is just days away from running out anyway. And if Republicans chose to pick that fight now, it would put the entire spending bill in jeopardy and Obama would once again be able to accuse Republicans—with the help of the mainstream media, of course—of engineering a government shutdown.

In fact, either side in budget negotiations can cause a government shutdown by refusing to make a deal. But no matter which side actually does that, the media always blames Republicans because the narrative has been established that Republicans love shutting down the government to bludgeon Obama.

The result will be that he will have no choice but to start enforcing the law again.

NYPD vs. DeBlasio – Round 1